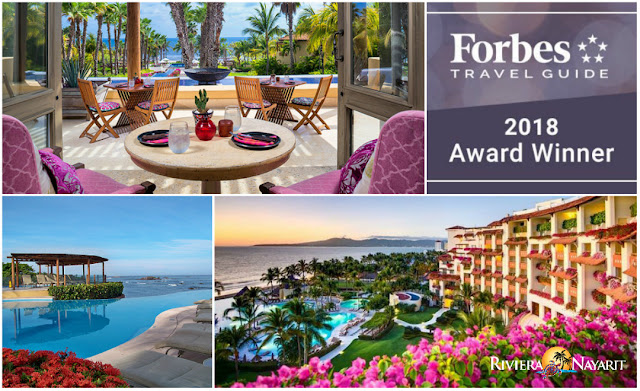 The prestigious 2018 Forbes Travel Guide Announced its Star Award Winners, where they recognize the most luxurious hotels and spas in the world; the winners list included four hotels from the Riviera Nayarit, located in Punta Mita and Nuevo Vallarta.
The winners included Five-Star, Four-Star, and Recommended hotels that deliver superior service and facilities.
The Five-Star Four Seasons Resort Punta Mita and The St. Regis Punta Mita Resort both appear on the list, as was the Four-Star Grand Velas Riviera Nayarit. There were also two special luxury awards for hotels and spas: the 2018 World’s Most Luxurious Hotel, received by The St. Regis Punta Mita Resort, and the 2018 World’s Most Luxurious Spa, awarded to the Spa at the Four-Star Grand Velas Riviera Nayarit.
According to the Forbes Travel Guide, their inspectors visited 1,017 in 50 countries in America, Europe, the Asia-Pacific region, Africa, and the Middle East in order to determine the winners of the awards announced this past February. The company gathers up to 900 data points from each of these inspections.  Fifty-eight hotels in 17 countries earned the coveted designation, representing the top 6 percent of the hotels with star classifications in luxury-related standards.
The luxury standards used to determine the list encompass considerations such as:
Click here for a complete list of winners:
Forbes Travel Guide 2018 Star Award Winners
https://www.forbestravelguide.com/award-winners
2018 World’s Most Luxurious Hotels
https://www.forbestravelguide.com/collections/2018-worlds-most-luxurious-hotels
2018 World’s Most Luxurious Spa
https://www.forbestravelguide.com/collections/2018-worlds-most-luxurious-spas
The Facts:
Forbes Travel Guide is celebrating its 60th anniversary and will visit 60 countries for its 2019 Star Rating.
###
The Riviera Nayarit Convention and Visitors Bureau (CVB) and the Bahía de Banderas Hotel and Motel Association (AHMBB) reaffirm their commitment to working intensely to attract more and better tourism to Mexico’s Pacific Treasure with the support of the Government of the State of Nayarit via the Tourism Promotion Trust (Fiprotur).
https://www.rivieranayarit.com/wp-content/uploads/2019/07/logox300.jpg 0 0 1stonthelist https://www.rivieranayarit.com/wp-content/uploads/2019/07/logox300.jpg 1stonthelist2018-10-11 15:14:002018-10-11 15:14:00Riviera Nayarit Hotels are 2018 Forbes Travel Guide Star Award Winners Spirit Airlines arrives in Puerto Vallarta and the Riviera Nayarit

Riviera Nayarit presented its new additions to the Canadian press