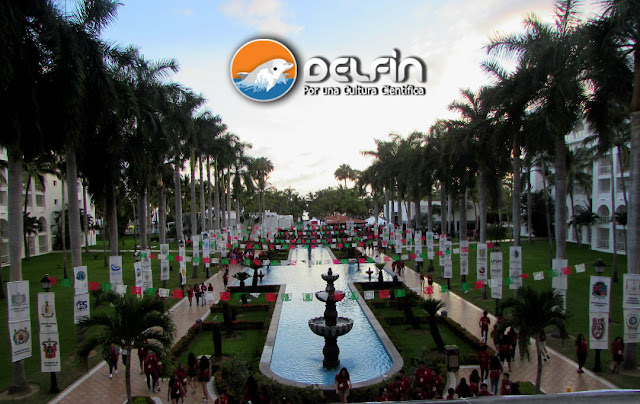 For the past 15 years the Riviera Nayarit has hosted the largest student mobility conference in Mexico, the International Conference for Scientific and Technological Research in the Pacific, derived from the Dolphin Program. Now in its 23rd edition, this year it had 2,341 student participants.
The conference took place after 2018’s XIII Summer of Scientific and Technological Research in the Pacific, where they digitally evaluated 8,902 applications from students and registered 6,320 participants, as well as 380 researchers from 15 of Mexico’s higher education institutions.
The objective of the Dolphin Program is to strengthen the cultural collaboration between the higher education institutions and research centers by mobilizing researchers-professors and students, and the circulation of scientific and technological products.
The Nayarit Autonomous University (UAN) is in charge of the overall coordination; Carlos Humberto Jiménez is the coordinator in charge along with the technical advisors.
The organizers of the Dolphin Congress have chosen Mexico’s Pacific Treasure for the past 16 years to host this event because of its infrastructure and connectivity, which allows thousands of scholars to showcase the results of their academic stay.
Guest country: Colombia
Riu Jalisco, Riu Pacífico and Riu Vallarta—all located in the Flamingos-Nuevo Vallarta—once again hosted the event. Students from 21 states in the Mexican Republic as well as from Colombia and Costa Rica gathered there to present their respective presentations.
Colombia was this year’s guest country: 120 students from that country were present, escorted by Dr. María del Carmen Vergara Quintero, coordinator of the Dolphin Program in that South American country. During the inauguration in Riu Jalisco she thanked the organizers for their invitation and the opportunity to participate in this very successful program.
The students themselves presented a traditional Colombian dance during the inaugural ceremony, much to the delight of attendees. They also presented a video that highlighted the many attractions of this Coffee Cultural Landscape, which has been classified as a World Heritage Site by the United Nations Organization for Education, Science, and Culture (UNESCO).
Institutions and technical advisors who have been a part of the Program 5, 10, and 15 years also received recognition. The ceremony was presided by Adrián Navarrete Méndez, secretary general for the Autonomous University of Nayarit (UAN), in representation of that institution’s rector. Also present, Carlos Humberto Jiménez González, general coordinator of the Dolphin Program, and special guest Dimpna Gisela Morales González, CONACYT’s liaison director for the Deputy Director of Postgraduate and Scholarships.
2018 DOLPHIN PROGRAM BY THE NUMBERS
https://www.rivieranayarit.com/wp-content/uploads/2019/07/logox300.jpg 0 0 1stonthelist https://www.rivieranayarit.com/wp-content/uploads/2019/07/logox300.jpg 1stonthelist2018-08-22 08:34:002018-08-22 08:34:00The Riviera Nayarit Hosted the Largest Scientific Student Mobility Conference in Mexico Do you think Riviera Nayarit is sexy?

Riviera Nayarit Reinforces its Marketing in the Midwest The Riviera Nayarit Strengthens its Presence with Business Partners Copa Airlines...
Scroll to top