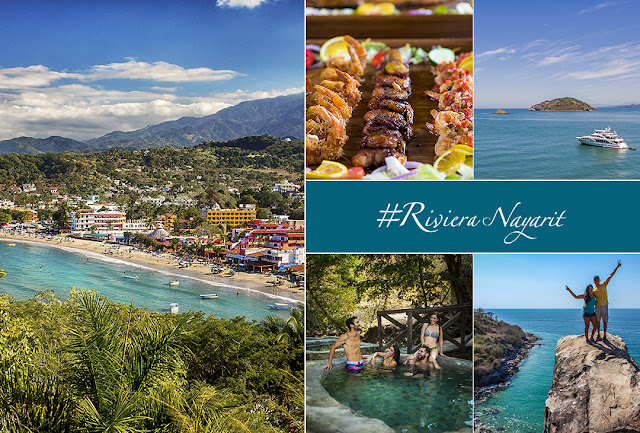 Rincón de Guayabitos, one of the gems of Mexico’s Pacific Treasure, is a family-friendly place with something for everyone. The beach is its highlight with its gentle waves, shallow slope, and fine sand, which is why it’s known as “Mexico’s largest swimming pool.”
This destination in the state of Nayarit has a varied hotel infrastructure that runs the gamut, from all-inclusive properties to bungalows and, of course, traditional hotels, comprising an offer that combines natural beauty, quality service, and options for every budget.
It also presents spectacular adventures in a privileged natural environment, ideal for aquatic sports such as paddle board, surfing, fishing, snorkeling, and diving, as well as glass-bottom boat trips and the chance to rub elbows with a fabulous variety of marine species.
Rincón de Guayabitos is part of the tourism corridor touched by the waters of Jaltemba Bay, along with Los Ayala and La Peñita. This last micro-destination will be featured later on.
The Heart of the Riviera Nayarit
Rincón de Guayabitos is known as “The Heart of the Riviera Nayarit” and it’s a very lively, vibrant spot that moves to the rhythm of its thousands of visitors that usually stop by for a weekend stay.
A walk on a Saturday or Sunday along its beach is like having an open window onto Mexico’s different regions. Entire families can be seen enjoying themselves under colorful umbrellas, eating ceviche or pescadito en vara, “fish on a stick,” or snacking on chopped fruit and drinking a refreshing piña loca, or crazy pineapple. Some even bring their own music or call over any of the several musicians walking around the beach to come liven up the afternoon. There’s no doubt life’s a beach—and it’s even more fun when it’s in Rincón de Guayabitos!
Gastronomy
There are several culinary possibilities to savor in this coastal town in Nayarit, ranging from traditional Mexican food and seafood dishes to more elaborate recipes, such as the pescado zarandeado (fish grilled on the beach) that’s served in some of the restaurants and palapas (thatched-roof huts) that dot the beach.
Visitors will also find a variety of snacks, like the pan de coco (coconut bread), plátanos fritos (fried plantains), nieves (sherbets), and dishes prepared with yaka—a local tropical fruit. Then there’s the famous piña loca, the crazy pineapple served with powdered chili and lime.
However, visitors can’t say they’ve been to Rincón de Guayabitos if they haven’t enjoyed a tasty fish and shrimp kabob barbecued over coal, a version of the classic pescado en-vara-zado (a play on words for grilled fish) that can be found all along the beach. It’s simply delicious!
Isla del Coral (Coral Island)
Isla del Coral has become a tourism icon in Rincón de Guayabitos and a “must” in the Riviera Nayarit. It’s located about 3 kilometers from the beach at Guayabitos, next to Isla del Cangrejo (Crab Island). It’s considered one of Nayarit’s protected ecological reserve, a natural habitat with a fantastic and varied flora and fauna.
The waters around the island are ideal for responsible scuba diving and snorkeling. If the visitor stops off on the island they can admire the marine bird sanctuary that’s home to pelicans, seagulls, frigate birds, boobies, and much more.
Secret Beaches
There are “secret beaches” to the south of Jaltemba Bay—these are lesser-known and have less visitors, which is how they keep their virgin charm. These include the Playa del Beso (Kissing Beach) or Frideritas, and the Playa El Toro (Bull Beach), which can be reached via a short but steep walk through the jungle or by boat from Los Ayala.

Alternative Tours – Altavista and Nuevo Ixtlán
Some 40 minutes northeast of Rincón de Guayabitos near the Sierra del Vallejo lies the Altavista archeological site, also known as La Pila del Rey (The King’s Tub), Los Petroglifos (The Petroglyphs), or El Santuario (The Sanctuary). It extends over 80 hectares and is home to over two thousand rock drawings. It’s believed these fascinating petroglyphs were carved over 1,500 years ago the by the Tecoxquines, an Aztec group who inhabited the land, to record their daily life. Some archaeologists think they could be offerings to their gods and have a fundamentally religious meaning; they range from simple spirals to complex symbols with intertwining lines and figures of plants, animals, and men. 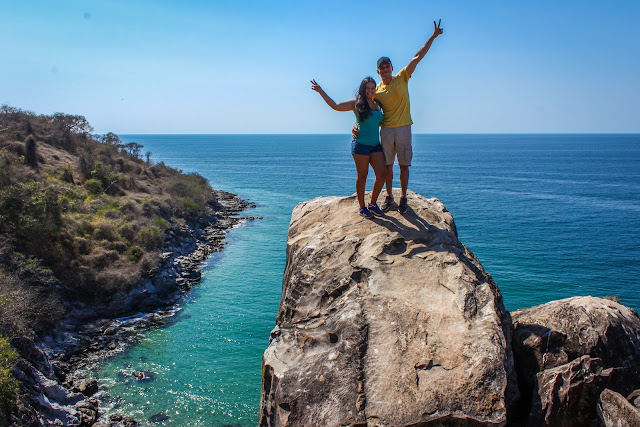 La Peñita de Jaltemba
One cannot talk about Rincón de Guayabitos without mentioning its “sister” village, Peñita de Jaltemba, located just five minutes to the north. This welcoming place offers its visitors serenity and gorgeous natural scenery—it’s no surprise that many foreigners have made it their second home.
Its name is a composite of Spanish and Náhuatl that translates into “place at the edge of the sand.” The addition of “La Peñita” (the small rock) was courtesy of the Spaniards making reference to the Isla del Coral, which looks like a rock.
The town’s crowning glory is a beach that offers visitors a unique scene: it’s dotted with fishermen’s boats and their nets, spread out to dry, as well as dozens of pelicans gently floating on the waves or picking their way through the sand in search of a bite to eat. The locals like to come by to work on their tan and swap fishing stories for hours on end.
Another one of the location’s charms it its tiny malecón, or boardwalk—just some 315 meters long—that extends from Rubén Jaramillo street to Crisanto Jacobo street. It opened in 2014 and is the best place in town to watch the sunset with the silhouette of the Isla del Coral carved out against the horizon.
This town has several small hotels and bungalows, homes for rent, a few supermarkets, restaurants, and an ample variety of businesses.
HOW TO GET TO RINCÓN DE GUAYABITOS AND LA PEÑITA DEL JALTEMBA

By Land
Rincón de Guayabitos and La Peñita de Jaltemba are 98 kilometers to the southeast of Tepic, the capital of the state of Nayarit. If leaving from that city you’ll need to drive along Federal Highway 200 Tepic-Puerto Vallarta, which will take you directly to this charming town in about an hour and half.
By Air
Those who would rather travel by air can land at the Puerto Vallarta International Airport, some 40 minutes’ south of Rincón de Guayabitos. They can also land at the Amado Nervo Airport in the city of Tepic and go by car to the beach resort.
https://www.rivieranayarit.com/wp-content/uploads/2019/07/logox300.jpg 0 0 Marc Murphy https://www.rivieranayarit.com/wp-content/uploads/2019/07/logox300.jpg Marc Murphy2018-06-08 10:36:002018-06-08 10:36:00What to Do and See in the Riviera Nayarit: Rincón de Guayabitos and La Peñita

PV-Riviera Nayarit Opens the Door to Latin America with Copa Airlines The Riviera Nayarit Reinforces its Tourism Promotion in the Western Part of...
Scroll to top