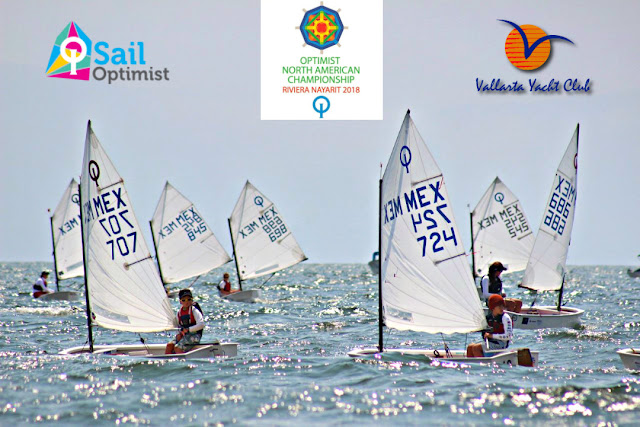 The Riviera Nayarit is ready to receive all 180 youths from 14 different countries to participate in the 2018 North American Optimist Championship, one of the top regattas in the world for the Optimist boat class and one of seven continental championships.
The event, held from June 24th to July 1st, will be organized for the third time by the Vallarta Yacht Club (VYC) in Nuevo Vallarta with the backing of the Mexican Sailing Federation (FMV) and endorsed by the IODA and the World Sailing Federation.
The official headquarters will be the Paradise Village Resort & Marina, where all the competitors, trainers, team leaders, and country representatives will lodge.
OPTINAM 2018 is made up of three competitions: Optimist Individual North American Championship (INAM); Optimist Team Racing North America (TRNAM); and Optimist Nations Cup (NC).
The youngsters who participate in the championship are between 12 and 15 years old, and are the best, fastest, and most talented young sailors in the world. “Many of them will probably be the next Olympic champions,” said Linda Green, director of the VYC’s Youth Sailing Program. 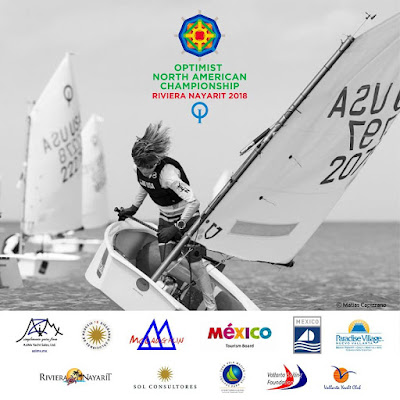 Argentina, Australia, Bahamas, Bermuda, Brazil, Canada, Cayman Islands, Peru, Puerto Rico, Singapore, the United States, Uruguay, the US Virgin Islands and Mexico will all have representation.
A total of anywhere between 500 and 700 visitors are expected to be directly involved in the event; there will also be ample diffusion via national and international media.
Marc Murphy, managing director of the Bahía de Banderas Hotel and Motel Association (AHMBB) and the Riviera Nayarit Convention and Visitors Bureau (CVB), mentioned the regatta is an incredible opportunity to enjoy the best of Optimist racing in a festive environment.
“Most participants come with their families and trainers and end up making a vacation out of the event since they’ll not only be competing, but also enjoying Mexican hospitality and the beautiful destination that is the Riviera Nayarit,” he added.

The competition
The official arrival date for the practice race and measurements is Sunday, June 24th. The inauguration ceremony is on Monday, June 25th, which includes a parade around the Paradise Village plaza and a ceremony honoring the Mexican flag. The five days of competition begin on Tuesday, June 26th on the beach at Nuevo Vallarta—also a perfect spot for viewing the races.
The organizers have also announced there will be spectator boats available for those who wish to see the races up close.
Good to know:
The Optimist class is one of the top choices for teaching new generations how to sail. These boats are generally single-handed (one crew member), that way the youths gain self-confidence and develop their abilities. Approximately 80% of all Olympic-level sailors began their careers on an Optimist.
For more information on OPTINAM 2018 see:
http://2018northamericans.optiworld.org/en/default/races/race
https://www.facebook.com/2018OptimistNorthAmericanChampionship/
####
The Riviera Nayarit Convention and Visitors Bureau (CVB) and the Bahía de Banderas Hotel and Motel Association (AHMBB), backed by the Government of the State of Nayarit via the Tourism Promotion Trust, congratulate the Vallarta Yacht Club for strongly supporting the sport of sailing, which has also helped to position the destination as a favorite for nautical tourism.
https://www.rivieranayarit.com/wp-content/uploads/2019/07/logox300.jpg 0 0 1stonthelist https://www.rivieranayarit.com/wp-content/uploads/2019/07/logox300.jpg 1stonthelist2018-06-21 11:57:002018-06-21 11:57:00The Riviera Nayarit Welcomes the 2018 North American Optimist Championship