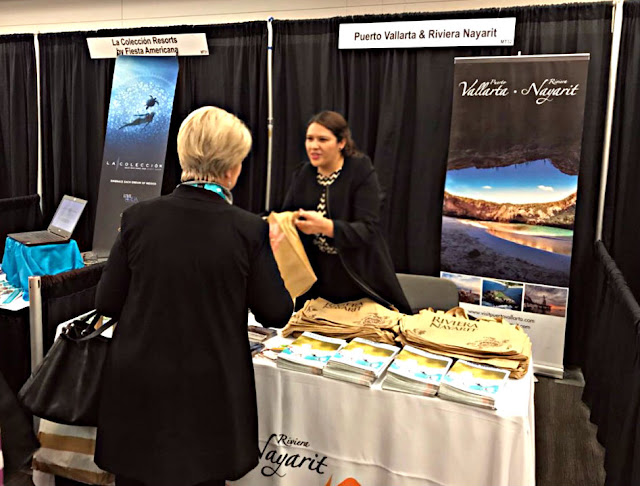 The Riviera Nayarit Convention and Visitors Office (CVB) and the Bahía de Banderas Hotel and Motel Association (AHMBB) have been hard at work promoting the destination within its international markets. This month they attended events organized by Canadian airline WestJet on April 23rd, 24thand 25th in Edmonton, Vancouver, and Calgary, respectively, accompanied by the Puerto Vallarta Tourism Trust.
This wholesaler, which operates regular and chartered flights to over 90 destinations in Canada, the United States, Europe, Mexico, Central America, and the Caribbean, has become one of the Riviera Nayarit’s top commercial allies. In fact, in January 2018 alone the airline sent 41 flights to the region from 12 cities around this northern country.
The promotional events began in Edmonton on April 23rd, where they met with over 375 travel agents who welcomed the updates from the Puerto Vallarta-Riviera Nayarit region.
On April 24th the joint tour moved to Vancouver, where they updated over 400 travel agents attending a tradeshow. The Mexico Tourism Board (MTB) office in Vancouver was also present at the event in the person of its director, Rodrigo Díaz de Rivera, who was at a pavilion inviting travel agents to get to know each of Mexico’s tourism destinations.
Finally, April 25th began with a visit to the main WestJet offices in Calgary, where the team met with over 200 call center consultants; 345 travel agents in Calgary also had the opportunity to learn more about the tourism attractions of Mexico’s Pacific Treasure and its commercial ally.
It’s important to point out this type of events allow for the corroboration of the positioning of the Riviera Nayarit within Canada, as the majority of the country’s travel agents know about, have visited, or have sent travelers to the destination.
Because of this, we predict an increase in the number of Canadians to the destination, as they will no doubt be attracted to the beauty, warmth, and excellent service and hotel infrastructure we offer.
The facts:
There are over 42 weekly flights to the Puerto Vallarta-Riviera Nayarit region during the Winter Season departing from 12 different cities in Canada, including: Abbotsford, Comox, Kelowna, Prince George, Vancouver, Victoria, Calgary, Edmonton, Regina, Saskatoon, Winnipeg and Toronto. There are seven weekly flights during the summer from Vancouver, Calgary, Edmonton and Toronto.
####
The Riviera Nayarit Convention and Visitors Bureau (CVB) and the Bahía de Banderas Hotel and Motel Association (AHMBB) are advancing their promotional strategy within the Canadian market, one of the most important in North America; with these actions they seek to maintain the preference for the destination exhibited by Canadian tourists. This is possible thanks to the support of the Government of the State of Nayarit via the Tourism Promotion Trust (Fiprotur).
https://www.rivieranayarit.com/wp-content/uploads/2019/07/logox300.jpg 0 0 1stonthelist https://www.rivieranayarit.com/wp-content/uploads/2019/07/logox300.jpg 1stonthelist2018-04-30 15:07:002018-04-30 15:07:00The Riviera Nayarit Warms Up Western Canada

WHAT TO DO AND SEE IN THE RIVIERA NAYARIT: Litibú-Higuera Blanca, nature’s hideaway

Let the wind bring you to Riviera Nayarit

The cuisine of Riviera Nayarit makes its way to Greece

Capoeira is back in Riviera Nayarit
0 replies

SEE IT TO BELIEVE IT IN THE RIVIERA NAYARIT: Lo de Perla, a seaside garden Restaurant Week 2018: Bigger And Better Than Ever
Scroll to top