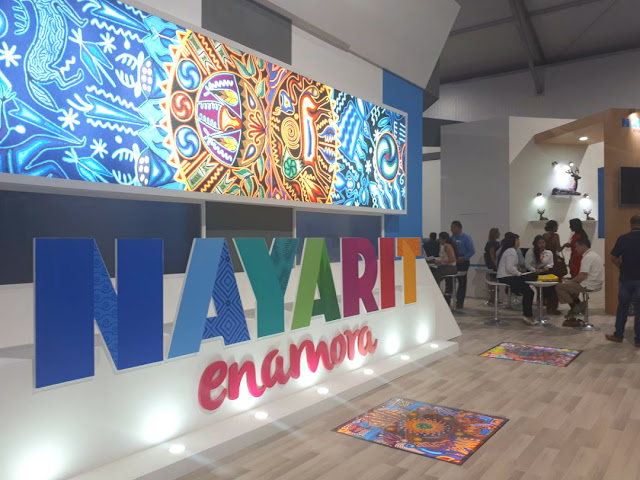 The Riviera Nayarit stole the show with its character and charm during its participation in the 43rd edition of the 2018 Mexico Tianguis Turístico, taking place in the port of Mazatlán in Sinaloa.
The presence of Mexico’s Pacific Treasure in this edition of the Tianguis Turístico presented an opportunity to generate business meetings and finalize marketing and sales strategies that will undoubtedly reinforce the promotion of the destination.
Two new hotels in Punta de Mita
The developments began early in a press conference with the announcement by John Hutchinson, President of Apple Leisure Group (one of the top tourism companies in the United States), of two new hotels for the Riviera Nayarit via its subsidiary, AMResorts. The Dreams Punta de Mita Resort & Spa, with 415 rooms, and the Secrets Punta de Mita Resort & Spa, with 200 rooms, are set to open in 2020.
The new hotels will be located on beautiful Banderas Bay in Punta de Mita, once a sleepy fishing and today the Riviera Nayarit’s top destination for luxury and exclusivity. This unique location will offer impressive views of the famous Islas Marietas as well as a semi-private beach.
According to Hutchinson, the design of these resorts is in the hands of the renowned Sordo Madaleno group, currently in charge of building the Sunscape Star Cancun.
Secrets Punta de Mita Resort & Spa will also offer guests a dolphinarium, high-end shops, and access to an 18-hole golf course, as well as all of the brand’s luxury amenities.
Luxury gets a boost
In that regard, Marc Murphy, Director of the Riviera Nayarit CVB and the Bahía de Banderas Hotel and Motel Association (AHMBB), expressed his satisfaction at the opening of these two new properties, which serve to reinforce the destination’s luxury offer.
“This is wonderful news for the accommodations offer in the Riviera Nayarit; AMResorts is present at the main beach destinations around the country, and the Riviera Nayarit couldn’t be the exception!”
As far as the business meetings, he commented the team is following an already-established three-day agenda, which starts at 8 a.m. and runs through 6 p.m. with consecutive meetings with wholesalers, airlines, and business partners including Apple Apple Vacations, Classic Vacations, Logitravel, Mark Travel, Air Canada, Island Destinations and Flight Centre, among others.

“We want the tourism professionals who visit Mexico to take with them the best impression and to be able to return and experience a vacation for themselves,” he added. “We want them to fall in love with the destination, so in the future we’ll be able to close more and better deals.”
Meanwhile, different activities were taking place at the Nayarit stand so the visiting public could see and experience what the state and its tourism destinations have to offer.
The Riviera Nayarit’s culinary offerings were also on display with a selection of traditional dishes designed by Nayarit native Hugo Ahumada, Executive Chef for La Patrona Polo & Equestrian Club’s Tierra Tropical restaurant. Israel Díaz, Mixology Ambassador for the Riviera Nayarit, was in charge of beverages, and coffee tastings were on-hand with brews from Compostela, a very important coffee producing area in the state.
And as happens every year, the Huichol culture was front and center with the presence of artisan Rogelio Benítez.
####
The Riviera Nayarit Convention and Visitors Bureau (CVB) and the Bahia de Banderas Hotel and Motel Association (AHMBB) reaffirm their commitment to the strategic promotion of the destination, seeking opportunities and consolidating markets in order to increase the number of incoming tourists, with the support of the Government of the State of Nayarit via the Tourism Promotion Trust.
https://www.rivieranayarit.com/wp-content/uploads/2019/07/logox300.jpg 0 0 1stonthelist https://www.rivieranayarit.com/wp-content/uploads/2019/07/logox300.jpg 1stonthelist2018-04-18 15:29:002018-04-18 15:29:00The Riviera Nayarit Steals The Show At 2018 Mexico Tianguis Turístico