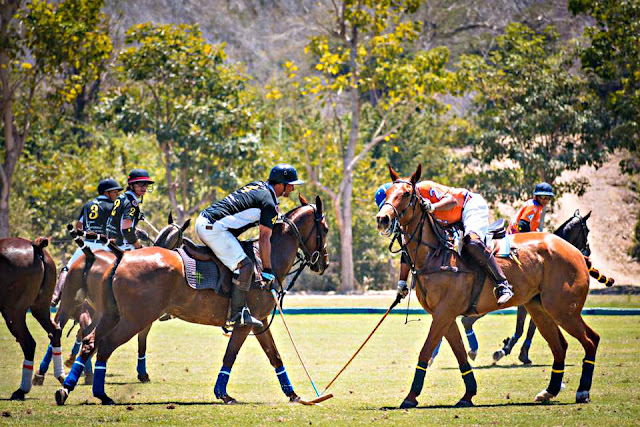 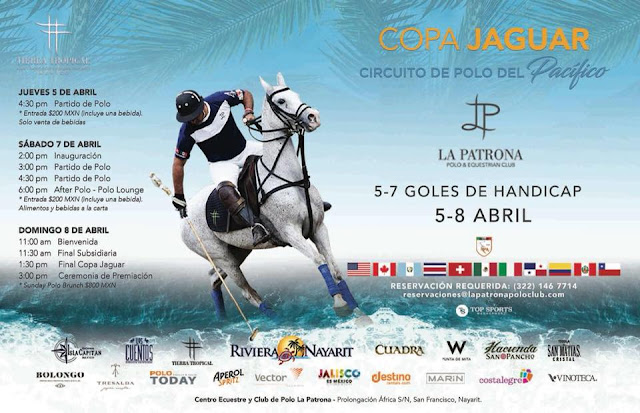 THE PROGRAM
The Jaguar Cup consists of four days full of activities. On Thursday, April 5th there will be one match open to visitors played at 4:30 p.m.
On Friday the 6th the players will tour the Riviera Nayarit region during the day, followed by a closed match in the afternoon. That evening there will be a cocktail party for the formal presentation of the teams.
The public will be welcomed back at 2 p.m. on Saturday the 7th for the Opening Ceremony. The polo semifinals are on the schedule as is the Spring Polo Picnic with live music and paella. There will also be an After Polo presented by Tequila Matías Cristal. That evening the players will be invited to San Pancho’s culinary offer.
The traditional Sunday Polo Brunch will be held on Sunday the 8th from 11 a.m. to 4 p.m. with live music, as will the Subsidiary Final, the Jaguar Cup Grand Finale, and the Awards Ceremony for the participating teams. The players will receive gifts from the sponsors; the winner’s trophy is a jaguar sculpture created by the local Huichol artisans.
The Facts:
La Patrona Polo & Equestrian Club, located in San Francisco, Nayarit, boasts a premier polo infrastructure and cutting-edge design. It is without a doubt the perfect spot to host world-class sports and culinary events.
###
The Riviera Nayarit Convention and Visitors Bureau (CVB) and the Bahía de Banderas Hotel and Motel Association (AHMBB) work hard to promote the destination with the support of the Government of the State of Nayarit via its Tourism Promotional Trust (Fiprotur). The sports tourism product offer is an invaluable asset for these promotional efforts.
https://www.rivieranayarit.com/wp-content/uploads/2019/07/logox300.jpg 0 0 1stonthelist https://www.rivieranayarit.com/wp-content/uploads/2019/07/logox300.jpg 1stonthelist2018-04-06 08:10:002018-04-06 08:10:00The 4th Jaguar Cup Kicks Off In The Riviera Nayarit

Windsurfers on the move at Riviera Nayarit

Riviera Nayarit will experience the combination of two passions

What To See And Do In The Riviera Nayarit: Punta Raza And Los Ayala Birdwatching Season In San Blas Comes To A Close With Excellent Stats
Scroll to top