The Riviera Nayarit continues to generate substantial investments that confirm the tourism potential of the area. Several groups and tourism chains have been attracted to Mexico’s Pacific Treasure, which has resulted in the construction of developments, hotels and/or hotel expansions or refurbishments.
In this Top 10 we’ve rounded up 10 important new projects that have landed in the Riviera Nayarit, not only improving the hotel offer, but also the wellness and gastronomy sectors.
Most of these were opened in 2017 and are already operating successfully in the destination, some are almost finished, but all of them are part of the new developments that make this one of the premier tourism destination’s in the world.
Villa Varadero Nuevo Vallarta-Tower 4
Villa Varadero Nuevo Vallarta’s fourth tower opened this year with a modern, fresh design, ample hallways, and very functional lighting—perfect for the high demand this particular venue has always experienced. Additional services include pools, bars restaurants, play areas and a wading pool for kids, as well as underground parking and many other attractions for this hotel dedicated 100% to families. It’s located in the Nuevo Vallarta neighborhood in the Riviera Nayarit.
Mozza Mare Club de Playa | Marival Residences & World Spa
Mozza Mare, a beach club exclusively built for guests of Marival Residences & World Spa, offers personalized service on the beach with lounge chairs, Bali beds, the indulgence of a massage by the water, complete food and beverage service on the beach with an exquisite casual menu, and the expert assistance of a beach concierge. Though still underway, it already has the distinction of the Marival Residences’ Four-Diamonds, which will ensure guests will feel completely pampered during their stay. 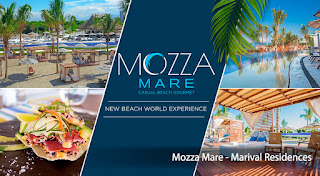 Grand Palladium Vallarta Resort & Spa
The Fiesta Hotel Group chain invested over $30 million in a three-phase remodeling effort for the Gran Palladium Puerto Vallarta Resort & Spa, located in the Riviera Nayarit. The transformation of the complex, which has 422 rooms, includes structural and décor upgrades that evoke a colonial aesthetic. The spa facilities have been expanded and they opened a new themed restaurant. The hotel chain has a total of seven top-rated hotels in Mexico.
Krystal Grand Nuevo Vallarta
In 2016 the Santa Fe Hotel Group announced the acquisition and expansion of the Bel Air hotel located in Flamingos, Riviera Nayarit, which opened in November 2017 with an all-inclusive plan under the name Krystal Grand Nuevo Vallarta. The new project not only added a new convention center, but also offers 480 rooms and one suite. It has six restaurants and event space for up to 1,000 people, all with the high standards of the Krystal Grand® brand. 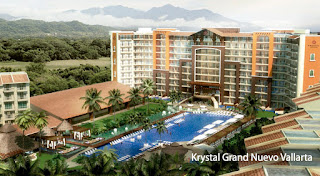 Punta Mita Hospital
The Punta Mita Hospital opened its doors on Friday, June 2, 2017 in one of Punta Mita’s tourism development and neighborhood’s main access points. Dr. Sam Najmabadi, a fertility specialist based out of Los Angeles and a group of investors were the main drivers behind this first-class facility. The hospital is over 1,200 square meters in size, and successfully competes with the top medical facilities in the United States, having brought over cutting-edge equipment and technology to Mexico.
Bucerías CMQ Hospital
The Riviera Nayarit CMQ Specialty Hospital opened on November 16, 2017. It’s located in the town of Bucerías and is focused on tourism medicine, as well as everything related to senior travelers coming in from the United States and Canada. The hospital offers plastic surgery, orthopedic surgery, bariatric surgery and cardiac procedures. With the opening of this facility, the CMQ Hospital Group has become one of the most important in the region. 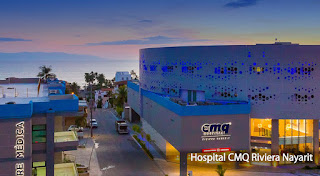 Apuane Spa | Four Seasons Resort Punta Mita
Spa Apuane is a serene oasis located inside the exclusive Four Seasons Resort Punta Mita. Created by Kollin Altomare Architects and Anderson Miller interior design, the spa’s concept is based on a sanctuary inspired by the Huichol people’s culture. The investment included two new treatment rooms as well as expanding the original 13 cabins. Guests are also enjoying a new reception area with Mexican-style décor.
Sufí Punta Mita
Tucked away between the green hills of the Jack Nicklaus designed golf course in Punta Mita, this exclusive oasis is part of the lovely beach at Punta Fortuna. Sufí is a Mexiterranean gourmet restaurant—a combination of Mediterranean and Mexican flavors—and it’s the perfect blend of serenity, Zen humor and Mexican hospitality, with an impressive architecture. 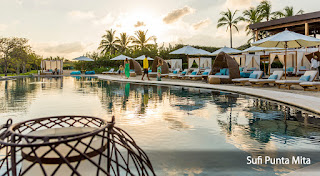 Tierra Tropical Beach Club
The Tierra Tropical Beach Club symbolizes the values of an innovative tourism formula, represented by the concepts of sustainable tourism and regional development. Its unique architecture hosts an exclusive restaurant and chef’s table headed by Executive Chef Hugo Ahumada, an art gallery, and a spa with activities and relaxation services. This is a new and exclusive culinary, holistic and artistic experience for visitors. Tierra Tropical is located in San Pancho, and is devoted to developing tourism and real estate in a harmonious, inclusive and respectful way, with promoting nature conservancy as a top priority.
Grupo Península’s Narval
The Narval Peninsula will be the ultimate in luxury. Located between the picturesque towns of Bucerías and La Cruz de Huanacaxtle, it will boast exquisitely designed residences and a variety of interior and exterior comforts, specifically directed towards the Canadian and North American travelers that are very keen on owning property in this area of Banderas Bay. It is, however, also being offered within the domestic markets of Guadalajara and Puerto Vallarta, as well as Mexico City and El Bajío. Belorussian Areseni Varaviyu created this architectural project; he has previously collaborated on several Grupo Peninsula projects in Mexico. 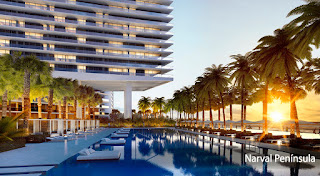 The Bucerías Patron Saint Festivities Begin in the Riviera Nayarit