The Riviera Nayarit has received different accolades since its creation, from “the most beautiful” and “the most exclusive” to the destination with the most coastal villages that extend from Nuevo Vallarta in the municipality of Bahía de Banderas all the way to Novillero in Tuecuala.
With over 300 kilometers of beaches, steep mountains, nature sanctuaries, golden sand, palm-fringed beaches and luxury resorts, Mexico’s Pacific Treasure is without a doubt the most surprising destination in Mexico.
To make our point, this Top 10 rounds up the attractions both natural and manmade that have become the destination’s icons: The Riviera Nayarit’s “10 Most.”
The most visited park: Islas Marietas
The Islas Marietas National Park is one of the biggest attractions in the Riviera Nayarit for tourists looking for watersports and underwater fun. According to the stats from Pro Natura Noroeste, from October 2016 through October 2017 over 260 thousand people visited the area, which was a 30% increase over the number of domestic visitors in 2015. Created by volcanic activity, these islands were declared a National Park and Natural Protected area in Mexico and tagged by the UNESCO as a Biosphere Reserve. One of its main attractions is Playa Escondida or Playa del Amor (Hidden Beach or Lover’s Beach), located in Isla Redonda.
The most photographed: Sayulita
Sayulita, the most-visited domestic destination in 2016, saw an increase of 123% in reservations and visitors over those of 2015, according to an analysis by Despegar.com. It’s also one of the most photographed places by thousands of visitors that arrive daily to this Magical Town in the Riviera Nayarit. Their first stop—and a must—is the obligatory picture at the start of Calle Delfines with the vibrantly colored cutout banners fluttering in the background. Not only that, but the boho-chic ambiance of its streets, stores galleries, and hotels beckons tourists to stop every few feet to capture the scene with their cameras. 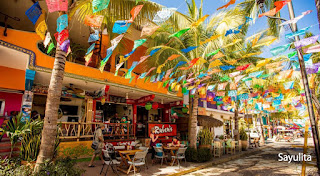 The longest wave: Matanchén
This is a perfect surfing wave and runs along most of Matanchén Bay from Santa Cruz in Miramar to Las Islitas, flowing past Los Cocos, Aticama and, of course, the beach at Matanchén. A few years ago it was considered the longest wave in the world, as it reached over 2 kilometers in length and could be seen from Matanchén to Stoner Point Break. Currently there are a few other longer waves around the world, but this is still the longest one in North America.
The longest beach: Novillero
Novillero is not only the longest beach in Nayarit, but in the rest of the country as well: it’s the second longest in Latin America, the third in the Americas and the sixth worldwide. It extends along nearly 90 kilometers and is nearly half a kilometer wide; the beach has fine sand that perfectly complements the tranquil waves. Beachgoers, in fact, can walk into the water for about 100 meters. This beach is very lively especially on the weekends, when entire families and groups of youths congregate on the sand to spend time together. Other nearby attractions include the Cuautla Canal and the Brava Lagoon. 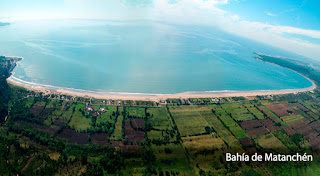 The most endemic culture in Nayarit: Coras
The Coras–who call themselves Nayeri—are an ethnic group that lives in the mountains of Nayarit, mainly in the municipality of El Nayar in the eastern part of the state. Their name comes from a great warrior who founded the kingdom of Xécora in the high mountains, identified as the “Son of God who is in the sky and the sun.” They inherited a magnificent ancestral culture filled with mysticism and magical traditions with which they maintain their racial purity and great spiritual strength. The Cora language is very similar to the Náhuatl, as they both descend from the Uto-Aztec linguistic branch, but their differences make it hard for them to understand other groups from the same branch.
The longest golf cart bridge
The Riviera Nayarit is home to the longest hanging bridge for golf carts in the World. It’s 402-meters long (a quarter of a mile) and connects the Greg Norman and Jack Nicklaus golf courses over the Ameca River within the Vidanta Nuevo Vallarta complex. The bridge was made in order to ease the flow of players between the two courses. Less than a year after its inauguration, this original passageway has become an iconic element for Vidanta and an attraction for the destination. 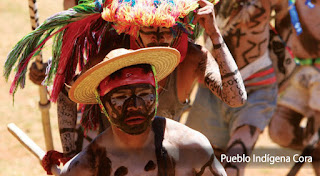 The most original green: Hole 3B (Taile of the Whale)
Hole 3B, also known as “Tail of the Whale,” is the only green on a natural island and is part of the Pacífico golf course in the exclusive development of Punta Mita in the Riviera Nayarit. This is such a spectacular place that renowned ex-golfer and golf course designer Jack Nicklaus has described it as the best Par 3 hole he’s ever designed. GQ Magazine UK published an article in August 2016 detailing the top 10 Par 3 holes in the world, and Hole 3B was there occupying number 7 on the list.
The biggest mammal: Humpback whale
The humpback whale is the fifth largest whale in the world. It is anywhere between 12 and 19 meters in length and weighs between 30 and 40 tons. Every year in the wintertime, these eternal visitors begin arriving in Banderas Bay after a voyage of over 16 thousand kilometers from the Arctic in search of warmer waters to give birth to their calves. According to data from the Whale Conservation and Ecology group (Ecobac), in a normal year they register between 300 and 500 of these mammals in Banderas Bay, from approximately 20,000 individuals that make up the humpback whale population in the northern Pacific. 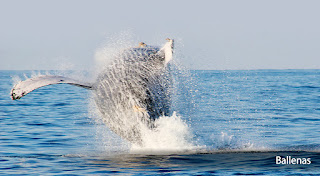 Most endemic and migratory birds
Approximately 546 bird species can be found between the coastal area and the mountains in the Riviera Nayarit, 428 of which are endemic and the balance migratory; this makes the Birdwatching Segment one of the sectors with the most potential in the region. Although San Pancho and San Blas are the best places to see these winged creatures—in San Pancho alone there are about 300 different varieties—the Riviera Nayarit in general offers exceptional conditions for this activity, as it’s part of the western migratory route for birds traveling from North America to the south.
The largest fruit: Yaka
This fruit is also called “breadfruit” and it’s remarkable because of its size: between 25 and 60 centimeters around and can weigh up to 20 kilos. The yaka arrived in America during the 18th century from Indonesia and Malaysia, and it found in the Riviera Nayarit the optimal climate for its growth. It tastes like a combination of banana, melon and papaya. It’s also known for its anti-asthmatic and anti-diarrheal properties, and for being one of the best natural aphrodisiacs. 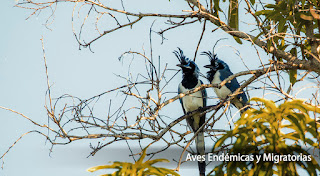 Enjoy the summer on the Riviera Nayarit’s best beaches

Luxury Travelers in Mexico Prefer the Riviera Nayarit for the Fall

Ciara Harris and ‘Future’ got passionate in Riviera Nayarit