The Riviera Nayarit has positioned itself in the film tourism industry on a national and an international level thanks to the variety of settings and locations that are just right for all kinds of productions.
Its natural landscapes are so spectacular they have served as the perfect location for more than one movie and the setting for music videos and commercials.
Over the past decade more than 100 movies have been filmed here, including the popular Bevery Hills Chihuahua, Limitless and Elysium, as well as programs from leading networks such as BBC, The Discovery Channel, National Geographic, MTV and ESPN, contributing to the projection of the destination on the global stage.
Below is a list of the 10 top videos, commercials and movies filmed in Mexico’s Pacific Treasure.
Café Tacvba Video (2016)
The Mexican rock band Café Tacvba chose the beaches of the Riviera Nayarit for the video of its single “Un Par De Lugares.” The video was filmed at the Caletas, Las Cuevas and Divisadero near Chacala, as well as the Punta de Mita ferry and in San Pancho. The song was recorded in July of 2016 in Morelos and the video entered into pre-production and filming in the Riviera Nayarit September 5-14 that same year. The record went on sale in 2017.
Café Tacvba
The Bachelor in Paradise (2016)
The shimmering beaches of the Riviera Nayarit set the stage for three seasons of The Bachelor in Paradise reality show, one of the most-watched shows in the United States. In it, a prized bachelor goes on a series of dates with women looking to woo him and win his heart. The winner is picked by the bachelor as his mate at the end of the show. Sayulita, Nuevo Vallarta, Bucerías, La Cruz de Huanacaxtle, Punta de Mita, San Pancho, and the beaches at Canalán and Las Cuevas were the chosen locations for some of the episodes. Back in May of 2012 the area was also the site of the first season of The Bachelor Canada, for which it won the 2014 HSMAI Bronze Award.
Bachelor in Paradise 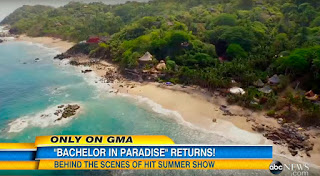 Billabong Commercial (2015)
The fashion world has also set its sights on the Riviera Nayarit. Back in 2015, famous Australian surfwear brand, Billabong, taped a video directed at their female audience featuring three young models and inspired by the magic of Sayulita. Titled “A Bikini Kinda Life in Sayulita,” the video showcases the Billabong lifestyle and that of this hippie chic town: lovers of surfing and nature who want to keep their style both on the beach and in the city. To date, the 2:26-minute long video has been viewed over 46,000 times.
Billabong
Captain Morgan Commercial (2015)
Sayulita’s popularity has grown in the past decade to the point where the producers of Captain Morgan used this Magical Town as the location for its new Tropical Flavor product commercials. The ad presented super model Chrissy Tiegen in one of the scenes titled “I Know What You Drank Last Summer.” The taping took place over the course of a week in February 2015 and left an immediate revenue totaling $200,000 pesos for the area. The commercial was aired on network TV in the United States as well as social media, not only that owned by the brand but also the model’s and the destination’s.
Captain Morgan 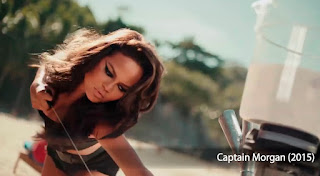 Invictus Award (2015)
Invictus, the famous extreme sports reality show with a cause sponsored by French perfumer Paco Rabanne, chose the Riviera Nayarit and its marvelous natural scenery to tape some of the scenes for its second season back in March 2015. The competitors, who hailed from 10 different countries, performed their aquatic activities in Punta de Mita and the Islas Marietas to promote the destination as the ideal location for sports and adventure tourism. Ex-rugby-player-turned-model Nick Youngquest was featured as the image of Invictus perfume as well as the reality show.
Invictus Award
Invictus Award by Paco Rabbane
Corona Extra Commercial (2014)
Corona Extra launched its Someplace Else project in the summer of 2014, an itinerant artists’ residence that included musician and surf star Ozzie Wright; Puerto Rican professional surfer Dylan Graves; Palestine-Filipino singer and musician Hanni El Khatib; Australian actress Rose Ashton; graphic artist Jeff Canham; and expert skateboarder and athlete Andrew Brody. The group embarked on a road trip that spanned the coast of Nayarit and lived a “Mexican adventure” aboard a bus for 7 days and 7 nights, which was taped and turned into a short film by Riley Blakeway.
Corona Extra 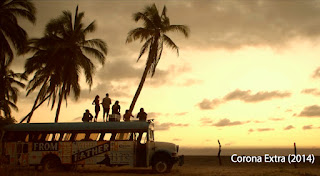 Buick Commercial (2014)
Buick Mexico created an advertising campaign called “Re-Discover Mexico” to showcase its vehicles in spectacular settings: the first phase included San Blas and other areas of the Riviera Nayarit including La Tovara, the Las Islitas beach, Isla de Mexcaltitán, Islas Marietas and Punta de Mita. They taped four capsules: two in Tepic—Nayarit culture and nightlife—, and two in San Blas with ecotourism guide Francisco García, with an additional capsule on gastronomy featuring prestigious chef, Betty Vázquez.
Buick
Carlos Santana Video (2013)
The Riviera Nayarit was chosen as the location for the Carlos Santana album “Corazón—Live from Mexico—Live it to believe it,” as part of the “Live it to believe it” campaign spearheaded by the Mexico Tourism Board (MTB). The album included a live concert as well as a series of videos interviews with different singers taped on location in this tourism destination. Singer Lila Downs was taped in the incomparable San Pancho, both on the beach and in town. Colombian Juanes used the Imanta hotel as the backdrop for his tapings, and Sayulita was the stage for talented Colombians Choc Quib Town, winners of a Latin Grammy.
Video Carlos Santana 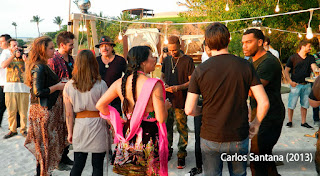 Limitless (2011)
This action thriller follows an author who takes an experimental drug that allows him to use 100 percent of his brain capacity. The stars of the film are Bradley Cooper and Robert De Niro, directed by Neil Burger. There are scenes at the Islas Marietas and an impressive villa in Punta de Mita, Casa China Blanca, among other takes of the region. The movie debuted in March 2011 in 2,756 US cinemas, raking in $79 million just in the United States. It grossed over $161 million internationally in box office receipts.
Limitless
Beverly Hills Chihuahua (2008)
Beverly Hills Chihuahua is another big production that chose the Riviera Nayarit as its location. In the movie viewers will see scenes filmed in the Magical Town of Sayulita. The Walt Disney Pictures production debuted on October 3, 2008 and tells the story of a Chihuahua named Chloe, who is originally from Beverly Hills. While on vacation in Mexico, Chloe gets lost and needs help returning home.
Beverly Hills Chihuahua 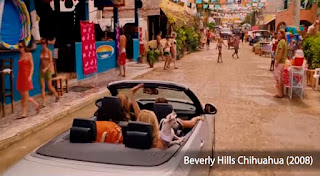