And the celebrities keep coming to Mexico’s Pacific Treasure… Not a month or even nearly a week goes by without a visit from an actor or actress or socialites like the famous Kardashian sisters—or someone associated with them.
Last weekend Scott Disick, Kourtney Kardashian’s ex-husband, was on the radar, well accompanied by no one less than young model Sofia Richie, daughter of musician Lionel Richie.
Both enjoyed a few days of R&R in Punta Mita, the Glamour Peninsula, staying at Casa Aramara, the magnificent residence owned by producer Joe Francis, creator of Girls Gone Wild.
Both Scott and Sofia shared an inside look at their trip with their thousands of followers on social media by posting a couple of photos. Scott shared a picture of Sofia sitting in his lap with the caption “Surfs up bruh.” They also shared a pic of their intertwined legs as the sun set on the horizon.
The two have been linked together since the Cannes Festival in May of this year, when a few images surfaced of them apparently acting in a suspicious manner. However, on that occasion they denied a love connection. It seems like the Riviera Nayarit worked its magic and this time around they didn’t feel they needed to “hide” their love. 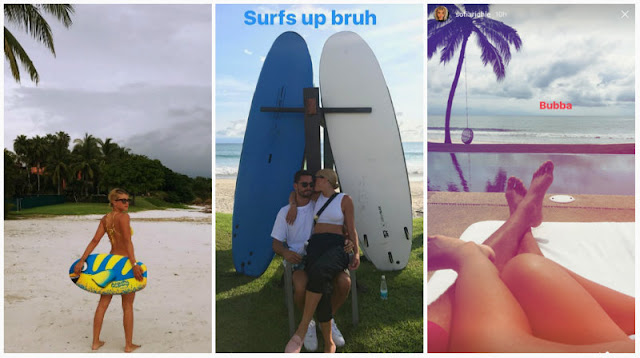 According to information given to this office, Richie and Disick spent all day Sunday by the pool listening to music and being pampered by the Casa Aramara butler. They also received massages and ate French fries, dining that evening next to a fire pit very close to the beach. The next day they visited the W Punta de Mita hotel, where they enjoyed drinks and snacks at the Spice Market restaurant.
Both Sofia Richie and Scott Disick are very active in social and other media, where they have over 22 million followers just on Instagram.
The fact:
Over the past 10 years the Riviera Nayarit has positioned itself as a destination offering luxury, privacy and beautiful natural surroundings, all sought after by celebrities when booking their vacation—and all of which are undoubtedly present in Punta de Mita.
https://www.rivieranayarit.com/wp-content/uploads/2019/07/logox300.jpg 0 0 1stonthelist https://www.rivieranayarit.com/wp-content/uploads/2019/07/logox300.jpg 1stonthelist2017-10-09 11:19:002017-10-09 11:19:00Sofia Richie And Scott Disick Reveal Their Romance In The Riviera Nayarit

Welcome Autumn At The Beach With The Riviera Nayarit’s Promotions