The Sport Fishing Club of Tepic announced the 5th De La Cruz International Sport Fishing Tournament to be held October 18-20, 2017 at the Marina Riviera Nayarit, considered the most modern marina in Latin America.
The event is organized by the Tepic Sport Fishing Club and backed by the Government of the State of Nayarit through its Secretary of Tourism, as well as the Riviera Nayarit Convention and Visitors Bureau (CVB), thanks to its relevance to the area’s tourism and sports segments.
The official presentation of the “Best Fishing Tournament in the Mexican Pacific” took place on Wednesday during a press conference led by Nemesio Castañeda Coppel, Nayarit’s Deputy Secretary of Tourism; together with Marc Murphy, the Managing Director of the CVB; as well Miguel Angel Sierra Quintana, the President of the Board of the Tepic Sport Fishing Club. Rocio Martinez Ocegueda, Tourism Director for the Bahía de Banderas, was also present.
During the conference they shared the details of the tournament, which has a 2.5 million-peso ¬prize purse, both cash and in kind. This year’s objective is to increase the number of registered boats, which was 50 in 2016, with projected revenue for the destination in excess of 11 million pesos.
The organizers expect the participation of ten states, among them Nayarit, Jalisco, Sinaloa, Guerrero, Colima, Michoacán, Guanajuato, Tamaulipas, Baja California, and San Luis Potosi, plus three countries: Canada, United States and, of course, Mexico.
CVB Director Marc Murphy highlighted the importance these fishing tournaments have in the context of the region’s tourism, which is why they receive the full support of his office.
“I would like to congratulate the Tepic Sport Fishing Club for believing in the destination, because this isn’t just a sports event for its participants to enjoy, it’s also a promotional strategy for tourism,” he added. “The Riviera Nayarit Convention and Visitors Bureau and the Bahia de Banderas Hotel and Motel Association took it upon themselves to create an events desk back in 2011 in charge of identifying opportunities and promoting activities along the tourism corridor from Nuevo Vallarta to San Blas, to the degree that today we’re involved in over 80 events per year, both directly and indirectly.” 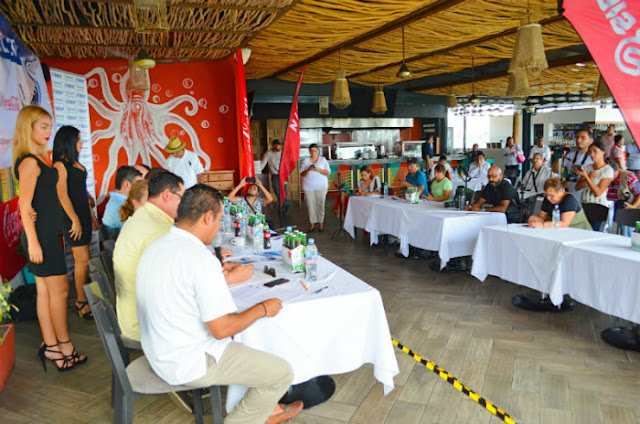 Categories and prizes
The organizers of the 5th De La Cruz International Sport Fishing Tournament for 2017 include Tuna and Marlin, Sailfish and Mahi Mahi. There are four sizes for each species: minimum size for the Mahi Mahi is 10 kg; Sailfish is 25 kg; Marlin is 85 kg; and Tuna is 50 kg.
They expect the participation of over 50 craft, each one with four competitors seeking to capture the biggest specimens and take home the prizes: four 2018 Nissan Versa cars and a 2018 March Active, four 4WD bikes and commemorative trophies.
Special prizes include: 10 thousand pesos to the captain of the winning crew; 10 thousand to the angler who breaks the Sail Fish record, which currently stands at 52.500 kg caught by the crew of the Acayapan; and 10 thousand pesos for the angler breaking the Marlin record for the tournament and the bay, which stands at 325 kg caught by the crew aboard the Giallo. A 2018 March Active vehicle will also be raffled among the boats that didn’t win a prize during the tournament.
Registration is still open and those wishing to participate need to register by October 18 on www.pescarivieranayarit.mx or in person at the Marina Riviera Nayarit with Harbor Master Rafael Alcántara.
https://www.rivieranayarit.com/wp-content/uploads/2019/07/logox300.jpg 0 0 1stonthelist https://www.rivieranayarit.com/wp-content/uploads/2019/07/logox300.jpg 1stonthelist2017-10-13 09:20:002017-10-13 09:20:005th Annual De La Cruz International Sport Fishing Tournament

Riviera Nayarit is being promoted through its gastronomy