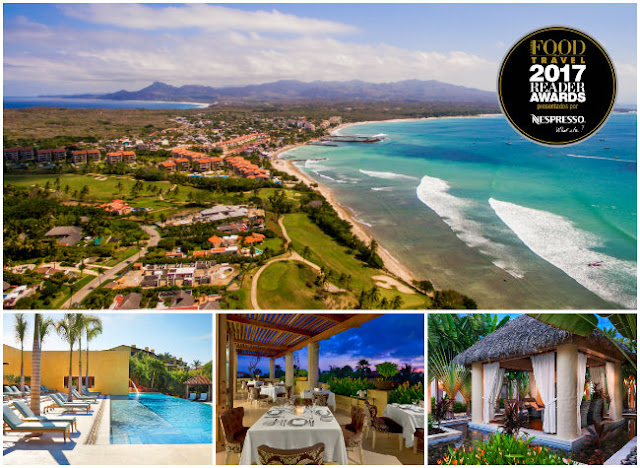 Vote for the Four Seasons Punta Mita or The St. Regis Punta Mita Resort in the categories of Best Beach Hotel in Mexico, Best Spa and Best Hotel Restaurant, and win a trip to Peru.
Two of the Riviera Nayarit’s hotels, Four Seasons Resort Punta Mita and The St. Regis Punta Mita Resort, have been nominated for Food and Travel Mexico’s 2017 Readers Awards.
Both hotels, located on the Riviera Nayarit’s Glamour Peninsula, are nominated for the category of Best Beach Hotel in Mexico. The St. Regis’ Remède Spa was also nominated for the Best Spa category for “the best facilities in Mexico offering a holistic experience for body and soul,” and the hotel’s Carolina restaurant is up for the Best Hotel Restaurant category.
Punta Mita has the most exclusive tourism resort in Mexico and it continues to appreciate, as do its hotels, which continue to stand out on the international stage and spearhead the luxury positioning of the destination.
These resorts are currently competing with five other beach hotels in Mexico, as is the spa and the restaurant, so your vote is very important!
More about the nominated hotels:
http://www.stregispuntamita.com/es| http://www.fourseasons.com/es/puntamita/
Vote for your favorites!
In the three years since they began the Food and Travel awards have become a benchmark in the tourism and culinary worlds, presenting a list of the top chefs, restaurants, hotels, destinations and gourmet eateries selected by readers themselves. In the past three years over 100 thousand people have made their opinion known by choosing their favorites.
The second stage of the contest, the voting stage, began August 7 at 12 a.m. and ends October 20, 2017 at 12 a.m. During this time period readers will have the chance to vote on the list of nominees to find the winners for each of the categories. People of all nationalities are allowed to vote, but they must reside in Mexico
.
Food and Travel is giving away a luxury trip to Peru for this fourth edition of the awards.
For details and to vote visit: http://foodandtravel.mx/awards/
https://www.rivieranayarit.com/wp-content/uploads/2019/07/logox300.jpg 0 0 1stonthelist https://www.rivieranayarit.com/wp-content/uploads/2019/07/logox300.jpg 1stonthelist2017-08-21 11:43:002017-08-21 11:43:00Riviera Nayarit Hotels Nominated For Food And Travel 2017 Awards

Preview Of the 2017 Vallarta Nayarit Gastronómica Paco Roncero “Cooks, Runs And Is Happy” In Riviera Nayarit
Scroll to top