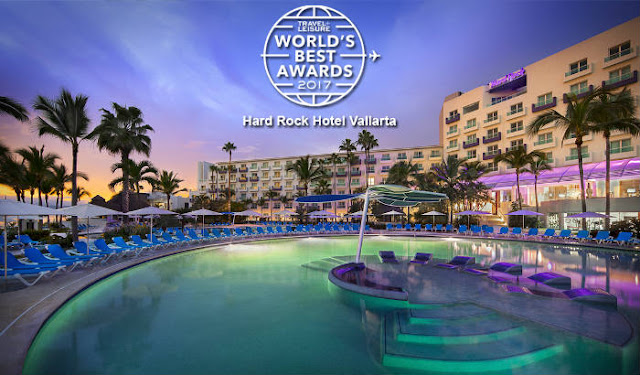 The hotel infrastructure of the Riviera Nayarit continues to garner all kinds of positive attention, as was the case with the publication of Travel + Leisure’s 2017 World’s Best Awards list, which included two of Mexico’s Pacific Treasure’s hotels among the best in Mexico and the world.
Every year the publication polls its readers to rate hotels around the world to compile a list of the best of the best.
This year the big surprise was the Hard Rock Hotel Vallarta, Riviera Nayarit, which was included in the “The Top 100 Hotels in the World” at no. 74—making it the destination’s top placed property. The same hotel was awarded 3rd place among the “Top 10 Resort Hotels in Mexico.”
The Hard Rock Hotel Vallarta is a luxurious all-inclusive hotel in the Riviera Nayarit where new meets classic with a view of one of the Mexican Pacific’s loveliest bays. 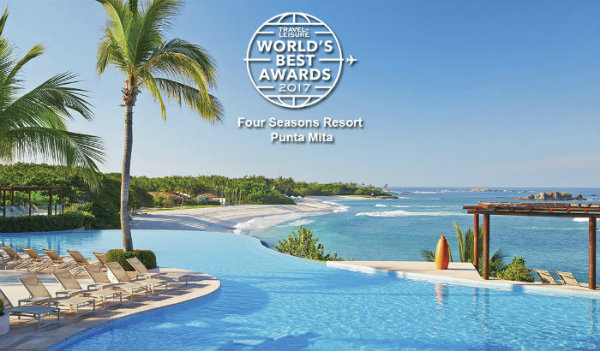 The Four Seasons Punta Mita, located on the Riviera Nayarit’s Glamour Peninsula, was also included in the list of the Top 10 Best Hotels in Mexico at 7th place, maintaining its excellent standing among the region’s elite properties.
T+L World’s Best Awards 2017
For its yearly survey of the Best Hotels in the World, Travel + Leisure asks its readers to share their opinions on hotels, resorts, cities, islands, cruises, spas, airlines and more. The properties are rated according to their facilities, location, service, food and overall value.
Travel + Leisure is one of the most influential publications in the international travel industry. The print version has a circulation of 970 thousand issues with 4.8 million readers, according to data supplied by the magazine.
The Riviera Nayarit Convention and Visitors Bureau (CVB) extends its congratulations to the Hard Rock Hotel Vallarta, Riviera Nayarit and the Four Seasons Resort Punta Mita for making this select list that gives the destination massive exposure among travelers from around the globe.
To see the complete lists, visit:
http://www.travelandleisure.com/worlds-best/hotels-top-100-overall#hard-rock-hotel-vallarta
http://www.travelandleisure.com/worlds-best/resort-hotels-in-mexico#hard-rock
http://www.travelandleisure.com/worlds-best/resort-hotels-in-mexico#four-seasons
https://www.rivieranayarit.com/wp-content/uploads/2019/07/logox300.jpg 0 0 1stonthelist https://www.rivieranayarit.com/wp-content/uploads/2019/07/logox300.jpg 1stonthelist2017-07-18 11:09:002017-07-18 11:09:00T+L Puts Riviera Nayarit Hotels Among The Best In The World

The Riviera Nayarit took the spotlight in the 2019 Tianguis Turístico
4th “Save The Sea Turtle” Drawing Contest
The celebration of the Tianguis is in our nature
3rd Punta de Mita Half Marathon
Night Golf Tournament in Riviera Nayarit is ready to start
Cultural And Scientific Programming Receives A Boost In The Riviera Nayarit
Midwest US Tour A Success
Riviera Nayarit promotional tour stops in Bolivia, Paraguay, and Uruguay
0 replies