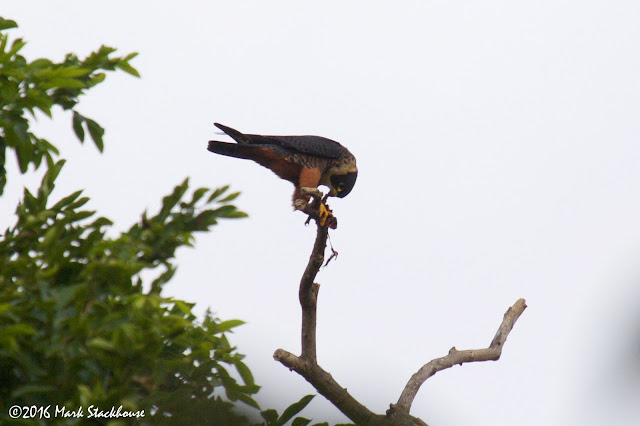 The San Blas Christmas Bird Count took place in the Historic Port of San Blas this past January 2, 2016, with 285 different species listed for a total of 16,630 specimens.
The results of the three days prior and the three days following the official Count Day were also added in order to tally up the official Weekly Count, which bumped the number to 309 species, thus breaking the record of 303 species set back in 1983.
Veteran birding guide Mark Stackhouse coordinated the event and was in charge of gathering, organizing, publishing and posting the information on the database.
This year a group of 22 birders from Mexico, the United States, Canada, the UK and Italy worked together, making it the highest number of observers in San Blas for the past 27 years, when there were 23 participants.
Four new species never-before seen by the birders were added during the San Blas Christmas Count: the Galapagos Shearwater, Vermiculated Screech-Owl, Blue-throated Hummingbird, and the Olivaceous Woodcreeper.
This Audubon Society count has occurred 116 times since it’s inception in the United States, and San Blas was the first destination in Mexico that was chosen back in 1973. This is the largest count in America; it takes place in 2,400 localities spread out over 23 countries.
San Blas also broke count records on the “Big Day” for Mexico in 2015 according to the rules of the American Birding Association. With these results, San Blas has come into its own as a world-class destination for birdwatching.
https://www.rivieranayarit.com/wp-content/uploads/2019/07/logox300.jpg 0 0 1stonthelist https://www.rivieranayarit.com/wp-content/uploads/2019/07/logox300.jpg 1stonthelist2016-01-11 07:00:002016-01-11 07:00:00San Blas Comes Into Its Own As A World-Class Birding Destination