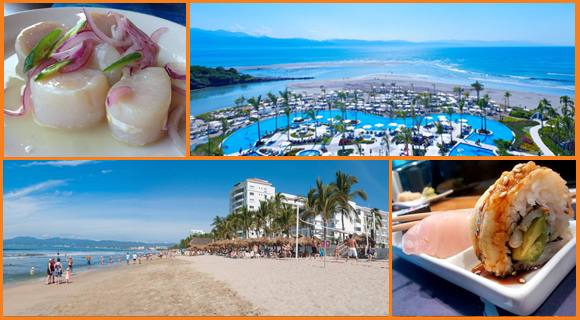 As promised, here’s Part 2 of our series on the wonderful microdestination comprised of Nuevo Vallarta and Flamingos, considered The Mainstream of the Riviera Nayarit because—among other things—over 60% of the area’s hotels are located here.
AAA 4- and 5-Diamonds
Nine of the Destination’s 14 hotels that boast either a 4- or a 5-Diamond AAA rating are located in Nuevo Vallarta and Flamingos, which speaks volumes about the luxury offered by this microdestination.
Only the Grand Luxxe and the Grand Velas Riviera Nayarit have 5 Diamonds, but the 4-Diamond list is long: Dreams Villamagna, Hard Rock Hotel, Marival Residences, RIU Palace Pacífico, The Grand Bliss, The Grand Mayan and Villa La Estancia.
It’s a similar scenario where restaurants are concerned, as four of the six that have AAA Diamond ratings are in this area: Epazote at the Grand Luxxe, Frida, Lucca and Piaf in the Grand Velas—all with 4-Diamond ratings.
Restaurants
Nuevo Vallarta offers options both for families as well as for the most demanding of foodies. This area has a cosmopolitan charm when it comes to its Gastronomy, much like the Destination in general. This is a place where one can enjoy a relaxed midday meal of fresh-caught seafood from the coast of Nayarit at El Marlin de Tepic or La Laguna Tino’s, then savor a formal Italian dinner at La Dolce Vita or Portobello.
The offerings of the many restaurants run the gamut, and include steak, wings, sushi, salads and much more. Hotels also have incredible specialty restaurants open to the public, such as Nicksan, a fusion restaurant with a Mexican and Japanese menu.
Blue Flag and Certified Clean Beaches
Nuevo Vallarta Norte is one of the few beaches that fly the internationally certified Blue Flag. The beaches at Nuevo Vallarta Sur, Norte I and Norte II have been accredited as Certified Clean Beaches by Regulation NMX-AA-120-SCFI-2006, a guarantee of wellbeing for your family.
The quality of these beaches allows thousands of sea turtles to use them to lay their eggs every year, which the Nuevo Vallarta Turtle Camp cares for until they hatch and the baby turtles are released. An estimated half a million sea turtles are released on the beaches of Nuevo Vallarta every nesting season, which extends from June through February, approximately.
https://www.rivieranayarit.com/wp-content/uploads/2019/07/logox300.jpg 0 0 Marc Murphy https://www.rivieranayarit.com/wp-content/uploads/2019/07/logox300.jpg Marc Murphy2015-09-25 08:10:002015-09-25 08:10:00Nuevo Vallarta, The Riviera Nayarit’s Mainstream (Part 2)
0 replies