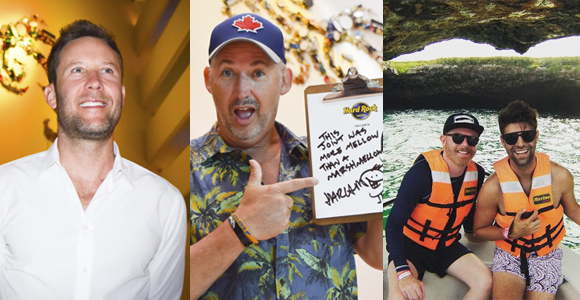 As time goes by, the Riviera Nayarit has gained a reputation as one of Mexico’s favorite destinations for celebrity sightings. Among the factors that have contributed to this are the privacy offered by the exclusive hotels and villas, their high level of service and, of course, the innate hospitality of the people of Nayarit; the excellent cuisine that is an essential part of the Riviera Nayarit experience; and the security offered by knowing their space is secure and beyond the reach of the media at large.
Few days ago we were visited by great actors; they spend their vacations and shared some pics showing the Mexico’s trendiest destination:
A super villain decided to visit Mexico’s Pacific Treasure. Who, you may ask? It was, in fact, Lex Luthor. American actor Michael Rosenbaum, who played the nemesis of the beloved Superman on the small screen series,Smallville, for 10 years, decided to indulge in a little R&R at the Hard Rock Hotel Vallarta in early September.
During that same time period, Canadian Harland William—noted actor, comedian and radio personality, who has been seen in movies such as Dumb and Dumber and There’s Something About Mary—was also seen being pampered at the Hard Rock Hotel in Nuevo Vallarta, Riviera Nayarit.
Finally, Jesse Tyler Ferguson was enjoying his getaway in the company of his husband Justin Mikita at The St. Regis Punta Mita Resort and they even posed for pictures in Las Islas Marietas; Jesse is part of the cast of the very popular ABC series, Modern Family.
https://www.rivieranayarit.com/wp-content/uploads/2019/07/logox300.jpg 0 0 Marc Murphy https://www.rivieranayarit.com/wp-content/uploads/2019/07/logox300.jpg Marc Murphy2015-09-11 08:38:002015-09-11 08:38:00More and more celebrities’ sightings in Riviera Nayarit
0 replies