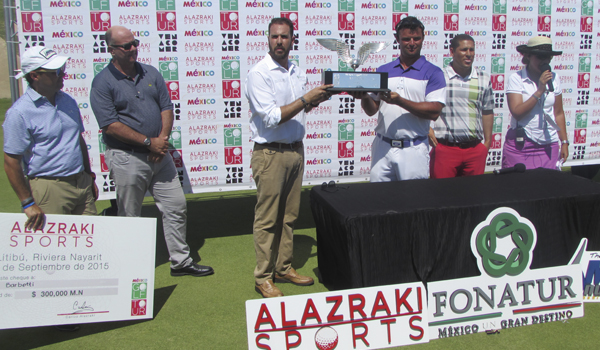 The Litibú Golf Course exceeded the expectations generated by the Riviera Nayarit Open, which was the third stop in the 2015 Mexico Golf Tour (MGT). Players and organizers alike were fascinated by all of the elements that make up this beautiful sports and tourism space in the Riviera Nayarit.
“It was great for us to be able to count on this locale and on the support of Fonatur (Fondo Nacional de Fomento al Turismo—Mexico’s National Tourism Trust) because they have a spectacular course, it’s beautifully maintained and has a fabulous view and an excellent design,” commented Claudia Staines, Director of the MGT.
“We’d like to thank Fonatur once again for this marvelous course, we’re very happy to be able to promote it and we hope they have more and more visitors every day. We’d also like to thank the staff of the Riviera Nayarit CVB,” said Alejandro Hütt, Director of Alazraki Sports.
“This event is a milestone for the region and Fonatur is thrilled to have hosted it. All of the players are very happy; they’ve even summed it up with their very own slogan: The best-kept secret in the bay,” said Francisco José Méndez Vargas, the Fonatur delegate in the Riviera Nayarit.
Argentine David Barbetti won the Riviera Nayarit Open with a final score of 11 under par, thus breaking the winning streak started by Mexican José de Jesús “El Camarón” Rodríguez, who had won the first two legs in the series.
“The Litibú course is spectacular, I’d like to encourage all golfers to come try it out,” declared the winner of this leg.
The Riviera Nayarit is one of two locales that are under development by the PGA Tour Latinoamérica. “We’re talking about—and this is straight from the players’ themselves—the most important mini tour in the world, because of the purses and because it gives you the opportunity to be a part of the PGA Tour Latinoamérica,” added Staines. Each purse for the 11 legs of the MGT amounts to 1.5 million pesos.
With this tournament both Litibú and the Riviera Nayarit will obtain a potential exposure of some 54 million impressions throughout the Americas thanks to the reality show that’s being taped during the event to promote the tournament and the destinations. The MGT will return to the Riviera Nayarit in 2016 thanks to the support of the Mexico Tourism Board and Fonatur.
https://www.rivieranayarit.com/wp-content/uploads/2019/07/logox300.jpg 0 0 1stonthelist https://www.rivieranayarit.com/wp-content/uploads/2019/07/logox300.jpg 1stonthelist2015-09-16 06:00:002015-09-16 06:00:00Litibú Exceeded Expectations For The Riviera Nayarit Open