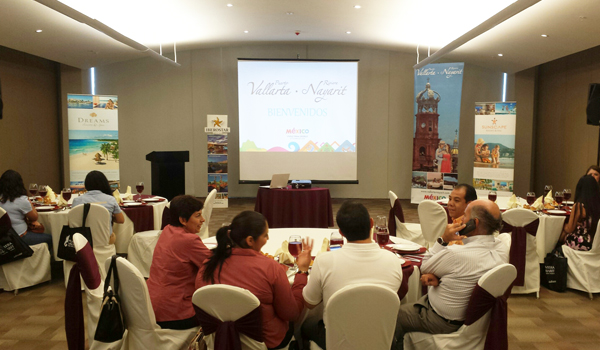 The Promotional Tour in the Bajío—part of the work performed in the interior of the country by the Riviera Nayarit and Puerto Vallarta Joint Promotional Campaign—came to a successful conclusion in the cities of León and Aguascalientes, where it was held from August 17-22, 2015.
“It’s vital for us to maintain the attention of the Bajío region, as it is a Natural Market for the Riviera Nayarit and Puerto Vallarta,” commented Marc Murphy, Managing Director of the Riviera Nayarit Convention and Visitors Bureau. “We already visited the area at the beginning of the year, taking in five cities, but this time we only went to León and Aguascalientes—they’re the standouts.”
Using information from the Riviera Nayarit CVB’s Barometer in the section on municipalities of origin for visitors during the first semester of 2015, it’s possible to see that León is in second place with 9.2% of visitors and Aguascalientes is in third with 9.0%; Guadalajara is in first place.
This trend continues in the classification by states. Guanajuato is in second place in number of visitors sent to the Riviera Nayarit, just after Jalisco with 13.5% and Aguascalientes in fourth place with 9.1%; Mexico City is in first.
The Bajío Tour was made up of a large committee of staff members from the Riviera Nayarit and Puerto Vallarta, as well as representatives for 30 hotels from both destinations. The purpose of the tour was to update the region with relevant information to help with sales for the upcoming winter season.
There were several seminar-style presentations for top Tour Operators and the travel and reservations agents who are the top sellers for the destinations. A total of 100 agents were reached between both cities.
https://www.rivieranayarit.com/wp-content/uploads/2019/07/logox300.jpg 0 0 1stonthelist https://www.rivieranayarit.com/wp-content/uploads/2019/07/logox300.jpg 1stonthelist2015-08-22 06:00:002015-08-22 06:00:00Successful Conclusion To The Bajío Promo Tour

Learn to sail this summer in Riviera Nayarit