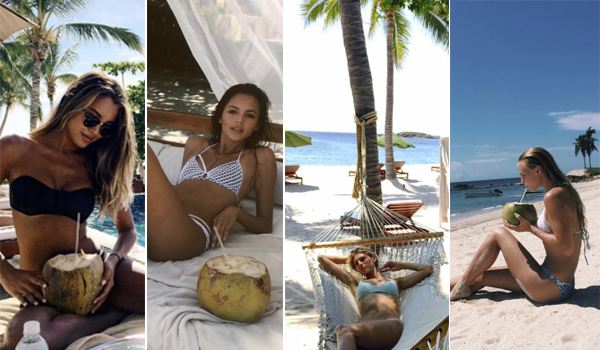 The Rivera Nayarit Convention and Visitors Bureau’s Celebrity Watch has been very busy the last few weeks, thanks to an excess of stars that have landed in Mexico’s Pacific Treasure this summer.
Most of them have been models posing in social media with their bikini-ready bodies enhancing the beautiful beaches of the Destination. Others include newscasters and entertainment TV hosts.
Mexico’s ex-beauty queen and current host of Televisa Deportes—model and actress Marisol González—took a few days off for a family vacation at the Hard Rock Hotel Vallarta. Newscaster Pedro Ferriz also chose this property to broadcast his news show; the kids from the Kidd Kraddick Morning Show were there, too. They were later seen in Sayulita.
Argentine host and model Dolores Barreiro chose the Grand Velas Riviera Nayarit for her stay, where she took pics showing off her pregnancy, accompanied by her husband and their children.
Punta Mita was the resort of choice for TV Azteca host Poncho de Anda and his family, where they celebrated his 12th wedding anniversary at The St. Regis Punta Mita Resort.
Temperatures rose at the St. Regis and Casa Aramara, thanks to the presence of several super models, who didn’t skimp on showing their sexy pics on social media.
The list of hot models in Punta Mita included Cassandra Down, Devon Windsor, Christine Burkee, Ashley Graves and Cassie Amato.
The Riviera Nayarit continues to shine as a Mecca for the rich and famous, which speaks volumes of its positioning as a national and international Destination.
Aquí los links de sus redes sociales:
https://twitter.com/marisolglzz
https://twitter.com/PedroFerriz
https://twitter.com/KiddNation/
https://twitter.com/ponchodeanda
https://instagram.com/p/6geM9agQV8/?taken-by=cassandradawnxo
https://instagram.com/p/6kyO7CxrwF/?taken-by=devwindsor
https://instagram.com/p/6jIJDzRFsc/?taken-by=christineburkee
https://instagram.com/p/6iwxG1R0j6/?taken-by=ashley_graves
https://instagram.com/p/6neF0jOyX9/?taken-by=cassieamato