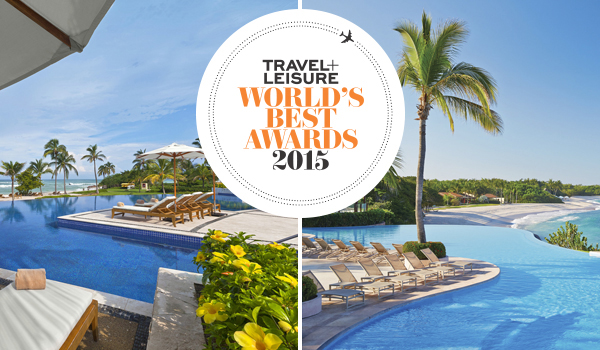 The Riviera Nayarit’s hotel infrastructure continues to lead the way on the international front and was showcased as being the best of the best: Travel + Leisure recently announced the different categories of its “2015 World’s Best Awards” where Punta Mita’s hotels were prominently featured.
The Four Seasons Resort Punta Mita and The St. Regis Punta Mita Resort remain on the list of elite hotels, upholding the area’s designation as Mexico’s most exclusive development located on the Riviera Nayarit’s Glamour Peninsula.
The Four Seasons is number 50 as the region’s top hotel on the list of World’s Best Hotels – Top 100.
The same hotel occupies first place in the category of World’s Best: Family Travel – Mexico, accompanied by the St. Regis in seventh place.
Finally, on the list of World’s Best Hotels – Mexico, the Four Seasons and the St. Regis are in fourth and eighth place, respectively.
This is why top celebrities such as Jessica Alba, Jennifer Lawrence, Selena Gómez, Gwyneth Paltrow and Charlie Sheen—just to mention a few of the most recent sightings in 2015—have visited this luxurious region of the Riviera Nayarit.
It’s also worth pointing out that earlier this year both hotels were featured on Travel + Leisure’s list of the top 500 hotels in the world.
Click below for the complete lists:
World’s Best Hotels – Top 100
http://www.travelandleisure.com/worlds-best/hotels-top-100-overall
World’s Best: Family Travel – Mexico
http://www.travelandleisure.com/worlds-best/family-mexico-hotels
World’s Best Hotels – Mexico Riviera Nayarit At Full Sail With The Vallarta Cup Race

The Riviera Nayarit reinforces its promotion in Mexico's western region