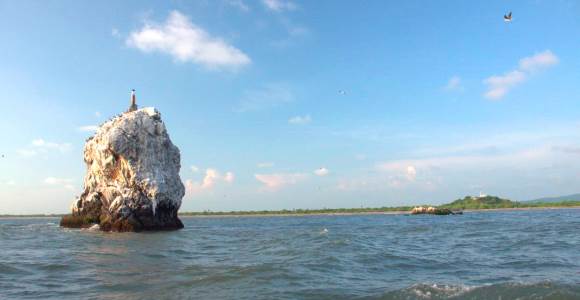 There are more than 7 reasons to visit San Blas, but it’s such a magical number that we dared pick just that many elements to describe the Historic Port of San Blas. A word of warning: we intentionally left out the Muelle de San Blas (San Blas Dock) and its famous madwoman, but there’s plenty more for you to enjoy below:
Cuisine
The Riviera Nayarit’s Culinary Ambassador, Chef Betty Vázquez, said it best: “The best cuisine is about more than just linens and silver—it’s the one that best preserves culture and history; one that utilizes the freshest regional produce; one that serves oysters just-picked from the rocks, and wood-smoked marlin or sailfish; the one that serves fruit juices and has an incredible number of recipes to prepare shrimp, red snapper and so many other species. This is the cuisine of our ancestors.”
La Tovara
La Tovara (or Tobara in Nahualt) is a spring that connects with the water canals that feed the area’s unique flora and fauna, including mangroves, orchids, crocodiles and hundreds of species of birds that live here or come here to reproduce.
The Cocodrilario
The Cocodrilario Keikari, which means “community” in Huichol or Wixárica, is more than just a home for crocodiles. It’s a small zoo that houses animals such as jaguars, mountain lions, eagles, caimans and green macaws, among other species. It’s a great place to take a dip in crystal-clear waters and spend a fabulous day with your family.
Hundreds of Birds
All of San Blas is known for having one of the highest concentrations of birds in Mexico and on the continent, including at least 300 of the 500 species of endemic, migratory and resident birds that fly through Nayarit.
La Contaduría and its Museum
Registries dating back to the 18th century and before make note of La Contaduría de San Blas (San Blas Accounting Office) as the most important center both for business and for the exchange of culture and products between the Americas and Asia and Europe. Today it has been converted into a museum where you’ll find maps, anchors, cannons and other accouterments from centuries past.
“Tatéi Haramara,” the White Stone
Just across from the municipal beachhead of San Blas is Piedra Blanca, the White Stone, on La Isla del Rey, home to the sacred Wixárica Tatéi Haramara or the “place where the soul and spirit are born.” Every 20th of May the Huichol people come here to hold their rituals and baptisms.
Surfing
San Blas was made for surfing. In fact, for years the break at Las Islitas held the title of “Longest Wave in the World” according to the Guinness Book of World Records. Even though it’s no longer in first place, it’s still quite the ride—and that’s just one example of what it has to offer!
https://www.rivieranayarit.com/wp-content/uploads/2019/07/logox300.jpg 0 0 Marc Murphy https://www.rivieranayarit.com/wp-content/uploads/2019/07/logox300.jpg Marc Murphy2015-07-30 11:06:002015-07-30 11:06:007 Reasons To Visit San Blas
0 replies