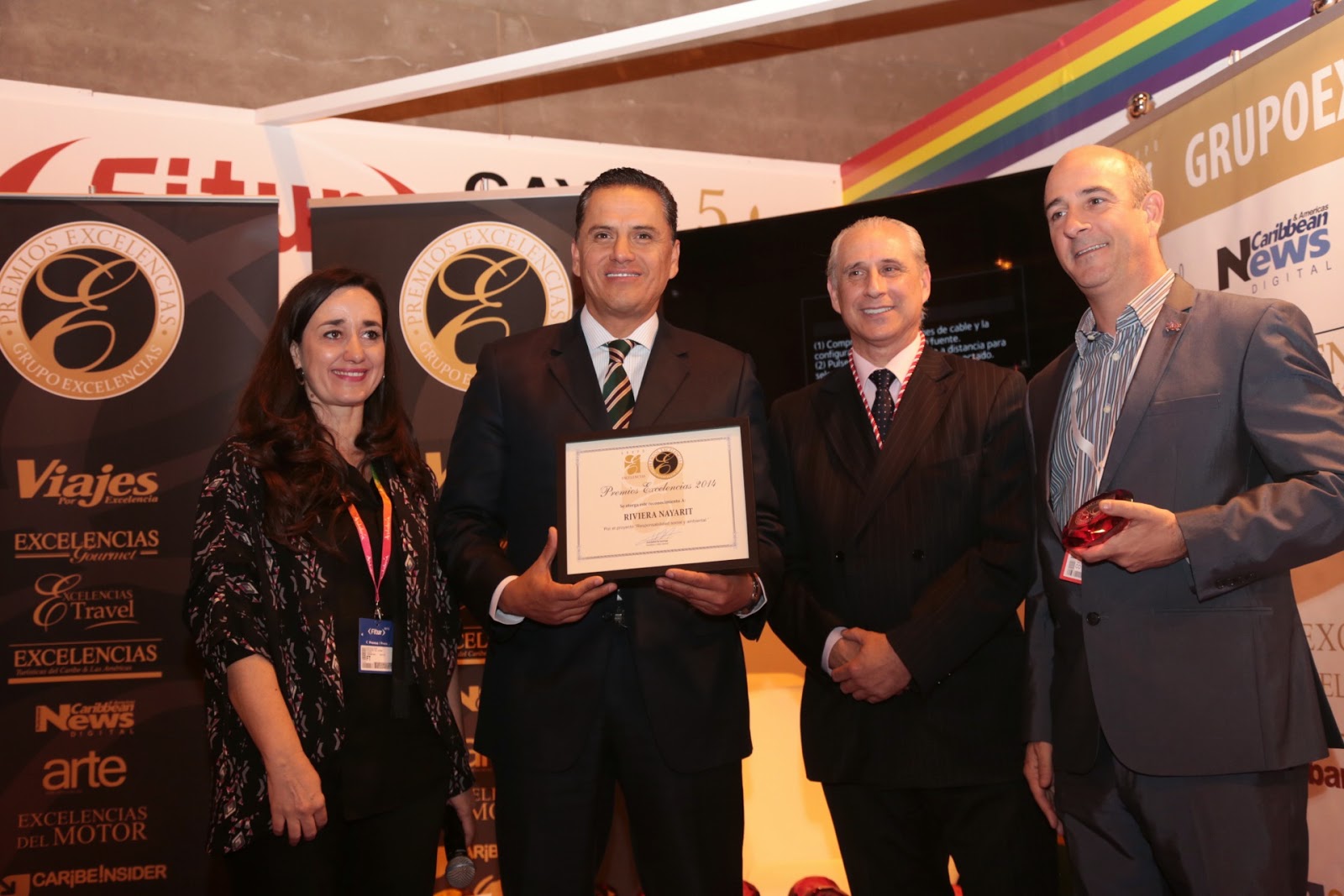 The State of Nayarit received its fifth consecutive “Spirit of Excellence” award during its seventh consecutive participation in the Fitur International Tourism Fair in Madrid, Spain. This time the award was presented to the Riviera Nayarit Convention and Visitors Bureau (CVB) for its “Riviera Nayarit Social and Environmental Responsibility” project.
The recognition was bestowed during the inauguration of the 35thedition of Fitur on January 28, 2015. Roberto Sandoval, Governor of the State of Nayarit, and Marc Murphy, Managing Director of the Riviera Nayarit CVB, were there to receive it.
This achievement was obtained thanks to the sustainability work the destination is putting forth via five projects focused on environmental conservation that involve the community and inspire it in taking ownership of this effort; it’s a joint responsibility that involves everyone.
The projects are: Protecting the Islas Marietas and humpback whale watching; EarthCheck Nuevo Vallarta; Blue Flag Certification; Clean Beach Certification; and the Beach Cleanup Network in the Riviera Nayarit.
“This award is for all the people involved that have supported the environmental programs operated by the CVB. The people who every month come out to clean the beaches are as important as the authorities from the three levels of government that lend their support from their respective areas, as well as the businessmen that put in the work so the Riviera Nayarit can continue to improve and position itself as an international destination,” commented Marc Murphy. “We thank each and every one of them.”
The relevance of this award lies in the prominent nature of its reception, which brings with it exposure to the thousands of participants in Fitur 2015, which include wholesalers, tour operators, travel agencies, hotel chains, media, organizations, associations and authorities.
https://www.rivieranayarit.com/wp-content/uploads/2019/07/logox300.jpg 0 0 1stonthelist https://www.rivieranayarit.com/wp-content/uploads/2019/07/logox300.jpg 1stonthelist2015-01-30 07:00:002015-01-30 07:00:00The Riviera Nayarit Obtained the “Spirit of Excellence” Award For Its Environmental Work

CLEAR YOUR SCHEDULES: EVENTS THROUGHOUT RIVERA NAYARIT FILL UP THE 2015 CAL... Events And Traditions Boost Tourist Influx
Scroll to top