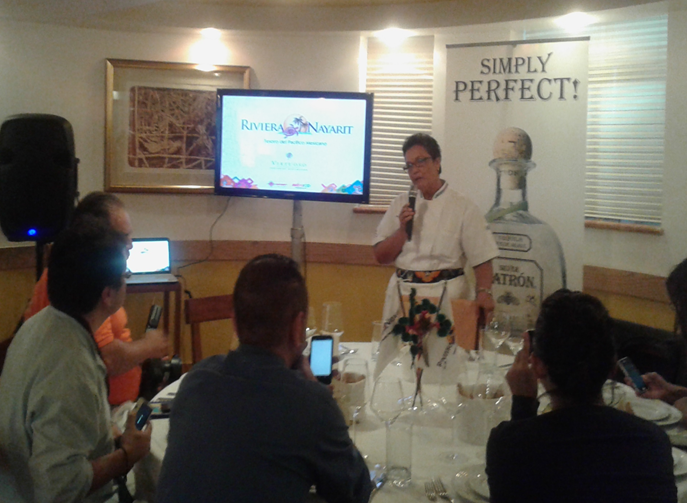 Conscious of the fact that Mexico is the top producer of tourism to the region, the Riviera Nayarit Convention and Visitors Bureau (CVB) diversified its promotional efforts within Mexico City in order to attract more domestic tourism.
A press conference, one-on-one interviews and a cross marketing activity with the Oster brand and Chef Betty Vázquez, the Riviera Nayarit’s Culinary Ambassador, all served to strengthen public relations in the metropolitan area.
About 20 different media assisted the conference on October 6th, where the CVB presented the year-to-date results at Restaurante Estoril, where they also took the opportunity to talk about the upcoming International Gourmet Festival featuring Chef Thierry Blouet.
Some 22 articles have already been published to date about the event generating a total of approximately 100 thousand impressions. There were also one-on-one interviews with Darío Celis at Excélsior TV and Laura Rodríguez on Grupo Radio Imagen on October 7th.
Finally, a cross marketing activity took place with the Oster electrical appliances brand and Chef Betty Vázquez, where the Riviera Nayarit’s cuisine took center stage.
Accessories, cravings, releases, tastings, electrical appliances, festival, demos, culinary exhibits, gourmet, seafood and recipes were some of the elements that stood out during this timely promotional activity.
According to some of the articles that were generated as a result of this cross marketing effort: “The gastronomy of our country is recognized throughout the world. This is indeed the case with the Riviera Nayarit, which also boasts a privileged location. The climate is excellent and thanks to its abundant summer rains and its fertile terrain it’s possible to enjoy uniquely flavored produce, which is invariably showcased in its many recipes.”
https://www.rivieranayarit.com/wp-content/uploads/2019/07/logox300.jpg 0 0 1stonthelist https://www.rivieranayarit.com/wp-content/uploads/2019/07/logox300.jpg 1stonthelist2014-10-25 06:00:002014-10-25 06:00:00The Riviera Nayarit Diversifies Its Promotion In Mexico City

The Tourism Recovery In The Riviera Nayarit Is A Done Deal

The CVB Perseveres In Its Promotion Of The Riviera Nayarit