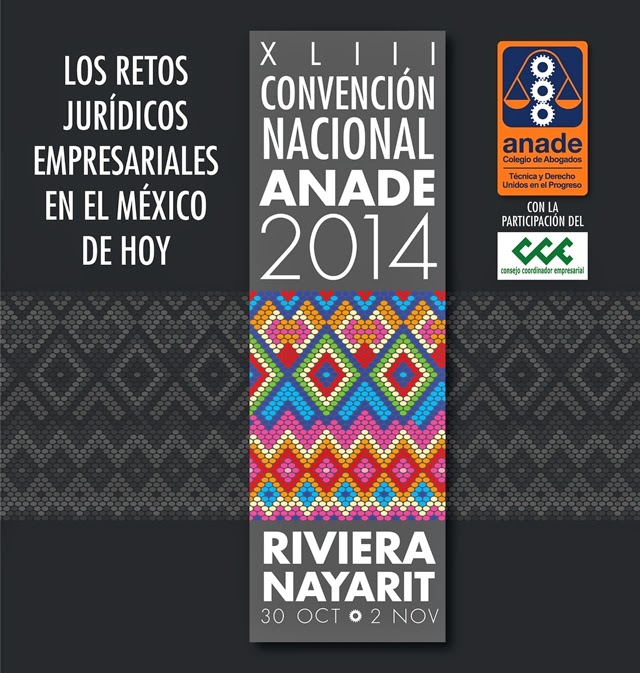 The Riviera Nayarit was chosen to host the Bar Association’s XLII National Convention for the Asociación Nacional de Abogados de Empresa (ANADE), which will take place from October 30 – November 2, 2014.
Thanks to its infrastructure, the Riviera Nayarit was chosen to host an event that focuses on conferences, workshops and debates as well as topics of domestic interest and the presentation of the 2014 ANADE Award. Other touristic, cultural and sports activities will also be held as part of the convention.
José Juan Méndez, the ANADE Council President, commented on the Riviera Nayarit’s natural beauty, history, culture, cuisine and beaches as the elements that determined his decision to hold the convention in Mexico’s Pacific Treasure.
“This seems to be a destination that successfully fulfills the objective of holding a high-end, top-notch judicial convention in a relaxed ambiance. We have no doubt the Riviera Nayarit is one of Mexico’s paradisiacal destinations, and that convinced us to book it,” added the Council President.
He also thanked the Riviera Nayarit Convention and Visitors Bureau (CVB), the Tourism Secretary and the Government of the State of Nayarit for their unflagging support in hosting the more than 300 lawyers attending the convention.
The inauguration will take place in the Marina Riviera Nayarit in La Cruz de Huanacaxtle; state authorities are expected to attend. The Grand Velas Riviera Nayarit is the official host hotel for the convention.
“They have truly made us feel at home,” he added. “When we were ready to make a choice, we chose the Riviera Nayarit.”
Registration is open for professionals, students, professors and anyone interested in learning more about judicial topics. For more information visit www.anade.mxor call 55 55454546.
https://www.rivieranayarit.com/wp-content/uploads/2019/07/logox300.jpg 0 0 1stonthelist https://www.rivieranayarit.com/wp-content/uploads/2019/07/logox300.jpg 1stonthelist2014-10-23 06:00:002014-10-23 06:00:00National Lawyer Convention To Be Held In The Riviera Nayarit Riviera Nayarit Reinforces its Marketing in the Midwest