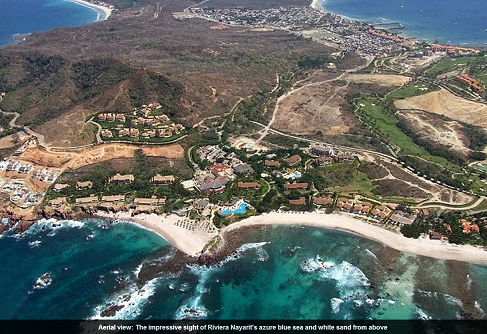 The wide variety of possibilities offered by the Riviera Nayarit as a tourism destination continues to gain positioning wherever its attractions are known. In Europe, it’s already being touted as “the hottest new destination” in Mexico.
This was confirmed by the website Mail Online, cyber-sister to the Daily Mail newspaper. This site is one of the most important and most influential sites in the UK and the English-speaking regions of Europe and the world at large, with 179,822,518 unique visitors on a monthly basis.
The article titled “Why Riviera Nayarit is Mexico’s Hottest Destination” gives a list of reasons why.
According to the article published on June 19th, the destination’s world class spas, endless beaches and the largest and most modern yacht marina in Mexico are enough, though they go on to say that “if it’s good enough for Kim and Kanye…” in reference to the celebrities’ recent visit, a nod to the destination’s popularity among the rich and famous.
From the article: “Mexico’s hippest new destination, Riviera Nayarit, stretches along 192 miles of pristine Pacific coast framed by the majestic Sierra Madre Mountains. The region (offers) chic luxury resorts as well as eco-tourism boutique hotels.”
“The region extends along the entire coast of the Pacific state of Nayarit including the resorts of Nuevo Vallarta, the historic colonial town of San Blas, exclusive Punta Mita, picturesque fishing villages, miles of serene beaches and spectacular Banderas Bay.”
The article was published on the site without any direct intervention on the part of the destination, something that’s  happening more and more often as a result of the constant public relations efforts undertaken by the the Riviera Nayarit in its different target markets.
This type of support is very welcome and is a great aid to continue filling the new weekly flights out of Manchester and London to the Vallarta-Nayarit international airport.
http://www.dailymail.co.uk/travel/article-2662327/World-class-spas-largest-yacht-marina-Mexico-Inside-Punta-Mita-Mexico-Kim-Kanyes-super-exclusive-second-honeymoon-hideout.html
https://www.rivieranayarit.com/wp-content/uploads/2019/07/logox300.jpg 0 0 1stonthelist https://www.rivieranayarit.com/wp-content/uploads/2019/07/logox300.jpg 1stonthelist2014-06-27 06:00:002014-06-27 06:00:00The Riviera Nayarit Is “The Hottest New Destination” In Mexico Riviera Nayarit is back at Virtuoso Travel Week

The Birds Of The Riviera Nayarit On International TV