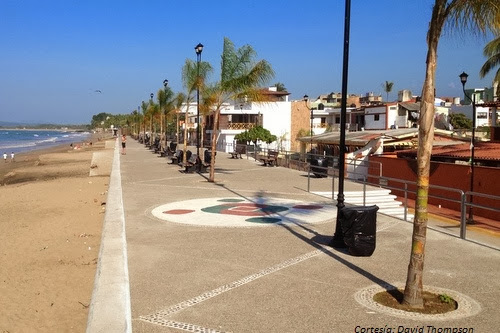 It’s been nearly a year since construction started on the new boardwalk, or malecón, at La Peñita de Jaltemba and it’s now down to a few small details. The inauguration is planned for early 2014.
The boardwalk runs some 315 meters from calleRubén Jaramillo to calle Crisanto Jacobo along the Libertad roadway and will benefit other nearby coastal towns, specifically Guayabitos.
Three separate levels of government came together to create this important improvement in the tourism infrastructure of the region. Rossanna Araujo, president of the Compostela Hotel and Motel Association (referred to as AHMC by its acronym in Spanish), urged the area’s citizens to care for their new malecón.
“I would like to address our citizens and urge them to take care of this new resource, to not litter or mar it with graffiti. This construction has greatly benefited La Peñita de Jaltemba, and I trust we will conserve it and stay vigilant so it remains undamaged,” said Araujo.
She also commented that even though it isn’t completely done people have already begun to use the area since the concrete was laid down; now it’s simply a matter of getting in the details.
“It’s already hosted art expos with paintings and handicrafts,” added the president of the AHMC. “This is tourism for the people; now there’s a lot more for everyone to do. It’s been packed since it’s nearly finished.”
The Paraísos Nayaritas program continues to grow, enhancing and revamping the infrastructure of the many coastal towns of the Riviera Nayarit. Another example is the new plaza under construction in Bucerías.
That project is just beginning and although it presents a short-term inconvenience for local businesses, truth is they are the first to admit that every benefit requires a sacrifice, and this one is not so onerous when compared to the benefits they will enjoy once the construction is finalized.
The shopkeepers have even commented on the fact that the workers stay on task deep into the night in order to finish the plaza as quickly as possible so as to add another fine tourist attraction to the Riviera Nayarit.
https://www.rivieranayarit.com/wp-content/uploads/2019/07/logox300.jpg 0 0 1stonthelist https://www.rivieranayarit.com/wp-content/uploads/2019/07/logox300.jpg 1stonthelist2014-01-03 07:00:002014-01-03 07:00:00The New Boardwalk at La Peñita is Almost Ready!