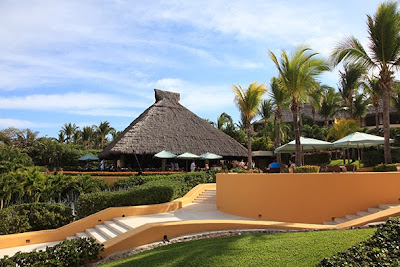 Now that Cascade Investment, owned by Bill Gates, has purchased the Four Seasons Punta Mita, the resident manager of the hotel, José Adames, is ready to share the news on what’s next for this exquisite resort.
There are two main projects on the table: one of the best spas in Mexico and a Sunset Bar in place of the traditional lobby.
“The first project will be the spa, as it’s something that had already been started under the previous owners,” said Adames. “The current owner, Mr. Gates, is convinced that the area should be completely redone. We’d like to finish it by 2014 and begin the holiday season by opening one of the best spas in all of Mexico.”
The start date is tentatively set for April for completion in November; the investment will be between four and six million dollars.
Another distinctive feature of this multi-million dollar upgrade will be the transformation of the traditional lobby into a Sunset Bar, which will give the Four Seasons Punta Mita the distinction of being the first and only hotel in this worldwide chain to have no reception area and no concierge.
“All of the interactions will be highly personalized, centered around the guest in the lobby chairs; we’ll be getting rid of those ‘reception desk’ barriers that have been an integral part of every hotel since the beginning of time,” explained the Resident Manager.
The project is currently in the planning and design phase; the proposed start date is sometime during the summer but nothing has been set as of yet, as the purchase transaction itself still needs to be finalized. This part of the project will see a three million dollar investment.
This hotel in Punta Mita, part of a very prestigious chain founded by Canadian Isadore Sharp, has kept its high standards of quality and service during the ten years that it has enjoyed its special Five Diamond category.
“There’s no doubt this has been a great success for the Riviera Nayarit,” said Adames. “We hope that it will focus more attention on this area and encourage other investors to have increased confidence in our destination.”
https://www.rivieranayarit.com/wp-content/uploads/2019/07/logox300.jpg 0 0 1stonthelist https://www.rivieranayarit.com/wp-content/uploads/2019/07/logox300.jpg 1stonthelist2014-01-17 07:00:002014-01-17 07:00:00Bill Gates Stakes His Claim at Four Seasons Punta Mita

5 Nayarit restaurants named among “The Great Restaurants of Mexico 2021”

The best of Mexico is now closer than ever!

Fresh Red Snapper from the coast of Riviera Nayarit