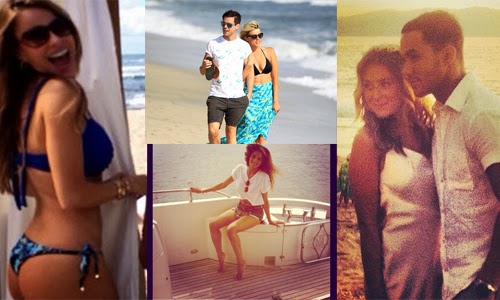 The Riviera Nayarit offers a fabulous diversity of attractions for families, couples and friends along with impeccable service, first-class accommodations and privacy like no other. These are precisely the traits that international celebrities look for in a vacation destination and the reasons why the Riviera Nayarit has become the celeb hangout of choice for A-listers.
The year 2013 started out on the right track with a visit from Justin Bieber and Selena Gómez, which caused a furor on the airwaves and social media, with their tweets making a huge impact on the young followers of both stars.
Around the same time, the young actress/singer Demi Lovato enjoyed her year-end festivities with her friends at the Four Seasons Punta Mita. The discrete artist posted about her stay in the beautiful Riviera a few days after her return to the United States, tweeting: “Rang in the New Year last night in Mexico having a dance party to my new music with my best friends. I’d say that’s a pretty awesome NYE ❤.“
Latin artists were duly represented by Juanes, who made more than one fan swoon with his incredible music at the Hard Rock Café Puerto Vallarta in February of 2013, as part of his “Loud & Unplugged” tour.
Kendra Wilkinson brought her own brand of fun and glamour to the destination last May when she visited with her friend Jessica Hall. Kendra’s popularity soared as a result of her participation in The Girls Next Door reality show. The beautiful model stayed at Villa La Estancia. Among her tweets: “Ummm I know this is bad at 10 am buttttt….. Cheers!!!! #MEHHEEEECOOOOO #tequila #smallgetaway #YOLO #romance.”
On a more low-key, family-oriented level, famous actress Tori Spelling celebrated her birthday and her 7th wedding anniversary together with her husband Dean McDermott and their four beautiful children with a stay at the stunning St. Regis Punta Mita.
The diversity of celeb sightings ran the gamut, and comedians were also part of the distinguished list of guests this past summer. Mayim Bialik, who plays Amy Farrah Fowler on The Big Bang Theory, stayed at Villa La Estancia, enjoying a few days of rest and relaxation after season’s end.
Leading actress Angela Bassett brought her kids Slater and Bronwyn to enjoy a few days’ vacation before the start of the third season of the popular American Horror Story, airing on FX. According to JuicyMagOnline.com, the actress stayed at Villa La Estancia Riviera, taking her daughter to the Tatewari SPA for mommy-and-me pedicures.
Towards the end of the year, legend Carlos Santana and his posse of international superstars visited several locations around the Riviera Nayarit and Puerto Vallarta to record his newest record, Corazón – Live from Mexico – Live it to believe it. The album will also include a live recording of a concert as well as a series of video clips with interviews filmed on location in the Riviera Nayarit and Puerto Vallarta. The recordings were capped with a get-together with Santana and friends on La Manzanilla beach, part of the Four Seasons Punta Mita Resort, where they all enjoyed the privacy afforded by Punta Mita at the water’s edge.
In December, actress Vanessa Johnston and actress/singer Etty Lau Ferrell, vocalist for Hong Kong’s Satellite Party, published tweets and images from Punta Mita and Sayulita on their accounts. On December 2nd Etty published: “11 days of Thanksgiving holiday, (we took and extra 2 for Punta Mita).” The trip was to celebrate her son Izzy’s birthday.
Closing the year in style, Colombian bombshell Sofía Vergara decided to spend her Christmas holiday in Punta Mita, accompanied by boyfriend Nick Loeb and her family. The actress is one of the highest paid Latin actresses in the United States and has had multiple Emmy nominations. She posted a picture clad a bikini with her boyfriend that showed the Marietas Islands in the background, as well as several pictures in the company of her family.
There’s no doubt the Riviera Nayarit has become the “it” destination for celebrities and we’re sure it will continue to rank high among the most demanding of guests. Why? Because luxury in the Riviera Nayarit… Is all about the experience.
https://www.rivieranayarit.com/wp-content/uploads/2019/07/logox300.jpg 0 0 Marc Murphy https://www.rivieranayarit.com/wp-content/uploads/2019/07/logox300.jpg Marc Murphy2014-01-20 12:30:002014-01-20 12:30:002013: THE CELEBRITIES’ FAVORITE DESTINATION

CAN’T-MISS EVENTS FOR THE START OF THE YEAR! RIVIERA NAYARIT A LUXURY MULTI-DESTINATION
Scroll to top