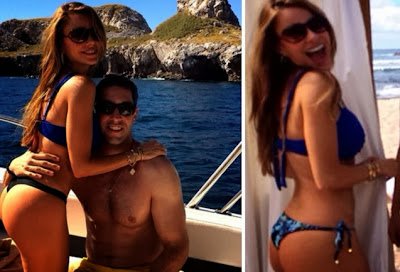 Colombian actress Sofía Vergara chose to spend Christmas with her family and her boyfriend, businessman Nick Loeb, in Punta Mita, Riviera Nayarit. Sofía is the highest paid Latin American actress in the United States.
Her photo in a bikini showing off her stunning figure shows the Marietas Islands in the background. During her stay she also took to the social media airwaves, letting her fans know she had tasted tequila and was once again completely wowed by Mexico’s Pacific Treasure.
Peter Facinelli, star of Twilight, was another recent visitor together with his girlfriend Jaimie Alexander, who was on the cast of Thor: The Dark World. They stayed in Nuevo Vallarta, enjoyed SPA treatments and even jet-skied around the bay.
Celebrities Tie the Knot in the Riviera Nayarit
The Riviera Nayarit has become the favorite stage for celebrities to frolic on during their down time as well as a preferred spot to celebrate the most important moments of their lives. Case in point: actors Teresa Palmer and Mark Webber, who chose Punta Mita to celebrate their intimate wedding.
The event took place on December 21st in a private house in Punta Mita, where a small group of select guests was invited to witness the marriage. Palmer herself gave Australian magazine WHO the exclusive.
“Mark and I are thrilled beyond words to be married in a very intimate and spiritual ceremony. We felt blessed to be surrounded by just a very small number of best friends and family,” commented the Australian actress, who starred in the movie Warm Bodies.
Palmer and Webber met over Twitter in 2012, began dating and one year later announced her pregnancy via the same social media platform, followed by their wedding announcement. The actress stressed she wanted to be married before her first child was born.
Webber is a well-known American actor with a 10+-year career, during which time he has acted in over 30 movies.
This event reaffirms the Riviera Nayarit’s positioning as one of the preferred destinations for celebrities, as was announced in early 2013 by the publication Business Insider, which singled out Punta Mita as one of the top ten vacation spots for celebrities.
More celebrity sightings from the movie, television, music and sports industries are expected during this holiday period, and they will doubtless enjoy their visit to Mexico’s Pacific Treasure.
https://www.rivieranayarit.com/wp-content/uploads/2019/07/logox300.jpg 0 0 1stonthelist https://www.rivieranayarit.com/wp-content/uploads/2019/07/logox300.jpg 1stonthelist2013-12-28 07:00:002013-12-28 07:00:00Sofía Vergara Spends Christmas in the Riviera Nayarit

A contest on Facebook generated 50,000 hits for the Riviera Nayarit Half Marathon

Riviera Nayarit is attracting the media through its gastronomy