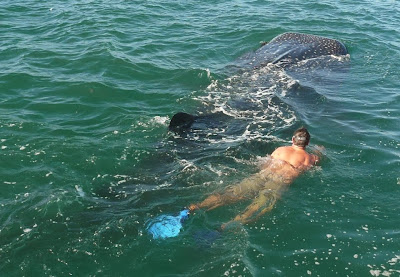 The Riviera Nayarit is kicking off the New Year with a world-class promotion: on January 1stand 8th, the very international Discovery Channel will air two programs on birdwatching filmed on Isabel Island, declared a Mexican National Park in 1980.
At precisely 7 a.m. on New Year’s Day, the second episode of Destination America consisting of video filmed on the birds and nature endemic to the Riviera Nayarit will air in 98 million homes. One week later, the program will air again, giving Mexico’s Pacific Treasure exposure in over 170 countries.
The program description explains how James Currie’s team scoured western Mexico’s magnificent Riviera Nayarit coastline searching for the endemic black-throated magpie-jays. They also highlight beautiful Isabel Island, home to colonies of nesting seabirds, as well as close encounters with whale sharks off the coast of San Blas.
The shows were taped in February of 2013 after the Riviera Nayarit Convention and Visitors Bureau arranged and coordinated the many details so the international host of Nikon’s Birding Adventures and expert bird watcher could come to the destination.
The natural bounty of the historical port of San Blas made it possible to film two separate episodes about the Riviera Nayarit.
Discovery Channel is an educational cable channel with ample distribution in the United States with original programming primarily focusing on science and technology, documentaries and series.
Versions of the Discovery Channel can be seen in the UK, Australia, Japan, Taiwan, India and other countries. Discovery Channel aired in 1985 as the flagship television property of Discovery Communications; today it offers 29 network brands in 33 languages.
Both episodes will also air on the Pursuit Channel, a producer of amply distributed channels geared towards outdoor pursuits. It reaches some 38 million homes.
Thus the Riviera Nayarit welcomes the New Year with a promotion that goes far beyond conventional advertising, offering the world the best type of publicity available: pictures that speak a thousand words.
Here are the links to the original episodes:
Episode 1: http://www.youtube.com/watch?v=shmlVftTzzg
Episode 2: http://www.youtube.com/watch?v=VCFrAHODv2w
https://www.rivieranayarit.com/wp-content/uploads/2019/07/logox300.jpg 0 0 1stonthelist https://www.rivieranayarit.com/wp-content/uploads/2019/07/logox300.jpg 1stonthelist2013-12-27 07:00:002013-12-27 07:00:00Discovery Channel Spotlights the Riviera Nayarit