Major advertising campaign investment in London
The Riviera Nayarit and Puerto Vallarta has partnered with TUI Travel Group, the largest travel company in Europe, to invest in a major advertising campaign that has been running from July of 2013 through July of 2014.
TUI owns eight European airlines that operate from over 60 airports in 9 countries. They serve regular and charter flights to more than 150 destinations around the world.
Several fairs, promotional seminars and public relations efforts have already taken place to promote relations with Great Britain with the full support of the Mexico Tourism Board (MTB) and Mexico’s Secretary of Tourism (SECTUR).
“There are currently several billboards on the streets of London touting the Vallarta-Nayarit ‘Live it to believe it’ joint campaign,” said Marc Murphy, Managing Director of the Riviera Nayarit Convention and Visitors Bureau. “The campaign is also in the online and hard-copy magazines from the World Travel Market, not to mention other advertising already in place thanks to this major investment.”
During last year’s World Travel Market, Mexico’s Secretary of Tourism, Claudia Ruiz Massieu, and Rodolfo López Negrete, Director of the MTB, were both present in order to consolidate several destinations in the UK.
The organizers of the WTM estimate the 2013 event generated over £2 billion in business deals; some 50,000 delegates were at the event, an increase of 5% compared to the previous year.
According to the UK’s Office for National Statistics the number of British tourists visiting Mexico in 2013 by plane directly from Great Britain increased by 22% ;the number of flight from the UK to Mexico also grew by 24%.
The numbers also indicate that Mexico represents 29% of the market within the British citizens’ preferences of places to vacation in Latin America and the Caribbean.
In addition to the advertising investment, there have been trainings and workshops for tour operators and travel agents, press conferences, FAM trips and other promotional services in order to generate more tourism, more jobs and increase the economic impact for the region. 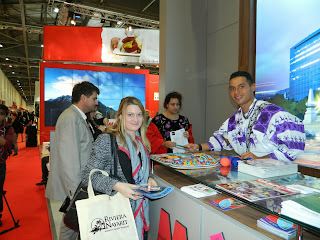