Abraham Levy Triumphs Over His “Trial By Fire”
In spite of tropical storm “Sonia,” it took 13 days for Levy to paddle from Los Cabos to the Marina Riviera Nayarit, which he now considers his home.
Self-propelled explorer Abraham Levy survived his “trial by fire” by crossing the 600 km between San José, Los Cabos, and the Marina Riviera Nayarit.
It took him 13 days and around 800 km to complete due to the strong winds and rain that came with tropical storm “Sonia.” It not only delayed arrival, but also put his life in danger.
“It was tough, I was scared and the days were pretty intense, but it’s all good,” said the athlete from Colima. “I’m back here safe and sound. I’m glad I got caught in that tropical storm, it was an important experience that taught me where I could take the vessel and how far I could go with it. They say a calm sea doesn’t make an expert sailor.” 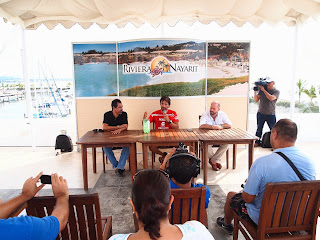 Abraham paddled across the high seas from October 26th to November 8th, taking the next step in the plan he created several years ago when he finally decided to start making his dreams come true.
“When I was 26 I wanted to spend my life making my dream come true, which is the best thing that could happen to any human being. The human spirit is amazing and being out there you realize that it’s actually something tangible,” he stated. “I didn’t know until I looked for it with all my might: I found it during my first expedition and now it helps me reassert my possibilities.”
He also confirmed that navigating the Mexican Pacific is in the “major leagues.” Levy did meet his goal, never forgetting to repeatedly thank the Marina Riviera Nayarit and the Riviera Nayarit Convention and Visitors Bureau (CVB) for the support he received.
“I felt at home here from the minute I knocked on the door to talk to them about the project,” he enthused. “There wasn’t a second of doubt and their cooperation was instantaneous: ‘What can we do for you? You have our support.’ It was really grand.”
“It’s so great to find a development that’s open to supporting unique projects. It was incredible, because it’s not easy to find such unconditional support,” he added. “I come and go in the Marina, I bring in the boat and take it out whenever I want, everyone is looking out for me.”
“We have the largest and most modern marina in all of Latin America,” said Marc Murphy, Managing Director of the Riviera Nayarit CVB, “and people like Abraham Levy and Tania Elías Calles have placed us on the world stage. Their accomplishments help grow our destination.”
“La Cascarita” is ready to be sent to Spain to cross the Atlantic Ocean. It will be a 9,000 km journey that will take between four and six months, depending on the conditions. He will depart on January 9th on the Canary Islands route, then on to Barbados and Cancún to continue to make his dreams come true.
https://www.rivieranayarit.com/wp-content/uploads/2019/07/logox300.jpg 0 0 1stonthelist https://www.rivieranayarit.com/wp-content/uploads/2019/07/logox300.jpg 1stonthelist2013-11-11 07:00:002013-11-11 07:00:00ABRAHAM LEVY TRIUMPHS OVER HIS "TRIAL BY FIRE"