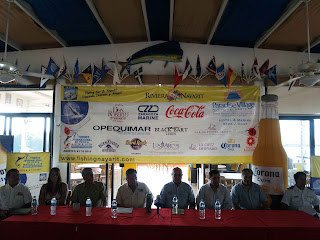 ·   The 7th banderas Bay International Tuna and Marlyn Fishing Tournament starts on Thursday August 8
The 7th Banderas Bay International Tuna and Marlyn Tournament is about to start in Riviera Nayarit.  Registrations for participants will be received this Thursday August 8 at Vallarta Yatch Club, in Nuevo Vallarta, from where competitors will depart in search of the big catch the following two days.
Great fishing reports are increasing expectations for both the organizing committee and the captains of ships on competition. A great number of yellow fined tunas catchs are on the bet the present edition of the tourney.
This optimism also reached Andres Famania, of the Banderas Bay Fishing, who said participation is the clue to consolidate this tournament and that they expect a considerable increase on international crews on the competition. “Historically, we have had over 40 per cent of the participants coming all the way from the US and Canada just to attend the Tourney and fish with us”.
The Convention and Visitors Bureau (CVB) of Riviera Nayarit considers that supporting events of this kind is instrumental to its promotional strategy, not only because of the number of tourists that they attract, but also because they provide an important stage for the international media that covers these events.
FOR FURTHER INFORMATION ON THIS TOURNAMENT:
www.fishingnayarit.com
https://www.rivieranayarit.com/wp-content/uploads/2019/07/logox300.jpg 0 0 1stonthelist https://www.rivieranayarit.com/wp-content/uploads/2019/07/logox300.jpg 1stonthelist2013-08-06 10:05:002013-08-06 10:05:00Ready to catch the big fish at Riviera Nayarit