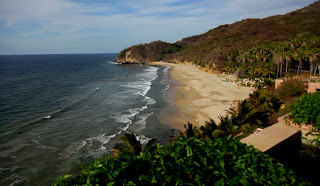 ·   St Regis Punta Mita is included on Travel + Leisure World’s Best Hotels List
·   MexicoDestinos.com included Mexico’s Pacific Treasure as one of the most romantic destinations
In Riviera Nayarit luxury is our nature, and this luxury can also be enjoyed at St Regis Punta Mita, which has been included in the World’s Best 50 Hotels, according to a survey made among international readers of Travel + Leisure. Also, MexicoDestinos.com listed Mexico’s Pacific Treasure as one of the most romantic getaways in the country.
Travel + Leisure is one of the most influential international publications in the travel industry. Its printed version has a circulation of 970,000 copies, out of which 97% are paid or verified subscriptions. Additionally, its online audience totals 23.3 million page views per month, for a total of 1.74 million unique users with an average visit time of 7.96 minutes.
For the last 18 years, this popular publication has conducted a survey among its readers to rank hotels around the world, in order to generate a list of the best properties. This year, ROI Research International conducted the surveys between January and March, and after removing all votes issued by travel industry professionals, it published the results last July.
The Convention and Visitors Bureau (CVB) of Riviera Nayarit is a non-profit association that operates under the direction of the Hotel and Motel Association of Bahía de Banderas in order to promote Riviera Nayarit. Through these actions we intend to promote tourism that fosters the harmonious development of all the people of Nayarit, as instructed by the Governor for the People, Roberto Sandoval Castañeda.
https://www.rivieranayarit.com/wp-content/uploads/2019/07/logox300.jpg 0 0 1stonthelist https://www.rivieranayarit.com/wp-content/uploads/2019/07/logox300.jpg 1stonthelist2013-07-17 10:14:002013-07-17 10:14:00Riviera Nayarit recognized by international media

The charismatic “booby,” an icon of the Riviera Nayarit

There are 7 Can’t-Miss Events in the Riviera Nayarit

Hiking in the Nayarit Jungle amongst Naranjilla, Cacao and Flor de Jamaica

12 Can’t-Miss Events in the Riviera Nayarit for November