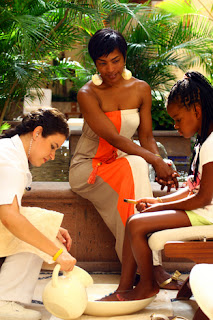 Luxury in Riviera Nayarit keeps attracting celebrities. Now actress Angela Bassett visited Mexico’s Pacific Treasure, adding to a long list of stars that prefer this magical getaway.
According to JuicyMagOnline.com, the actress stayed aat Villa La Estancia Riviera Nayarit in company of her children, Slater and Bronwyn with whom she played both in the beach and the pool. But she was also spoted with Bronwyn having pedicure at Tatewari SPA.
Bassett would have taken quality time with her children before the premiere of FX’s American Horror Story third season, but it’s not the first time she has been spotted at Villa La Estancia Riviera Nayarit; she and her husband, also actor, Courtney B. Vance spent 2012 Thanks Giving with their children here.
In the past few months, Riviera Nayarit has become one of the preferred destinations for celebrities, with the visit of important personalities like Thierry Henry, Kate Hudson, Felicity Huffman, Gerry Lopez y las hermanas Kim y Kourtney Kardashian, Lady Gaga, Courteney Cox, Charlie Sheen, Mario Lopez, Sofia Vergara, Kristen Dunst, Juliette Lewis, Eva Longoria, Justin Bieber and Selena Gomez, Demi Lovato, and most recently Kendra Wilkinson and Tori Spelling.
The work being made by the Convention and Visitors Bureau (CVB) of Riviera Nayarit is evident through visits like these, which help position our destination as one of the best worldwide, and will highlight the importance of improving visitors’ experiences for hotels, restaurants, government, service providers and the society in general.
https://www.rivieranayarit.com/wp-content/uploads/2019/07/logox300.jpg 0 0 1stonthelist https://www.rivieranayarit.com/wp-content/uploads/2019/07/logox300.jpg 1stonthelist2013-06-26 07:52:002013-06-26 07:52:00Angela Bassett, another celebrity visiting Riviera Nayarit

A battle of the Saints at Mexcaltitan

In Bloom: Tabachín The Riviera Nayarit Golf Invitational about to start
Scroll to top