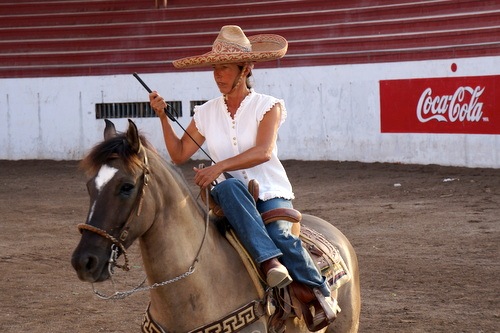 Horses have been a passion of Donna Brownfield’s since childhood, so it was only natural that she would want to explore the horse culture here in Mexico. On her first trip to the Jaltemba Bay area in 2008, she informed her housemates that she was “going to look for a horse to ride.” The valley behind her house in La Peñita was a logical choice as she could see horses over there. While describing this trip Donna says, “I hadn’t walked for more than 10 minutes when I heard a horse clippity-clopping down the road behind me. That was my first encounter with Abundio, the well-known octogenarian charro with a huge mustache and large sombrero, who would become my friend and riding partner for the next several years. It was on a ride in this same valley 4 years later that I came upon the emaciated herd and subsequently assisted George and Loretta in forming the Jaltemba Equine Education Project (J.E.E.P.).”

Donna distinctly remembers meeting Bertha Cueva, captain of the local escramuza team, who was at one of the first organizational meetings for J.E.E.P. After the meeting, she asked George Leavitt if he thought Bertha would let her ride with her. She admitted being totally ignorant of the traditional ways, but if it involved horses, she wanted to be included.

This is where Donna’s story comes full circle.

Ironically, the chance to become a “Charra for a Day” was auctioned off at the first “Pony Up” for J.E.E.P. Fundraiser on January 23, 2013. This amazing once-in-a-lifetime opportunity was donated by none other than Bertha Cueva and included a special sidesaddle riding lesson and a chance to join the Charras in an upcoming event. Little did Donna know that Loretta Leavitt, an accomplished equestrian herself, and her husband George decided to bid on this item to give to Donna for all that she had done for the J.E.E.P. project.

Bertha and her friend came to the “Pony Up” for J.E.E.P. Fundraiser to explain what the Charra tradition is all about.

At the time of the fundraiser, Donna was in Oregon, and it wasn’t until the following day that she learned via email that Loretta had “won” the bid and had given this thrilling prize to her. Donna says, “I felt very lucky to be offered this honor.”

Donna returned to La Peñita in March 2013, and while she was looking forward to the lessons, she still wasn’t quite sure of what she was getting into. Read more on JaltembaBayLife.com

NAYARIT'S CUISINES IS "UP IN THE AIR"

Colombian Press Showcases The Wonders Of The Riviera Nayarit