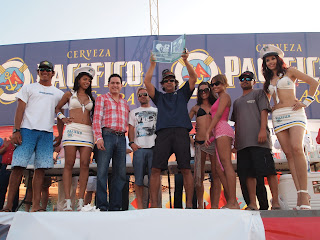 – The 53° International Sport Fishing Tournament in San Blas will assemble approximately 280 enthusiasts, who will vie to catch the largest sailfish, marlin and dorado

Over 250 sport-fishing enthusiasts will assemble in Riviera Nayarit to compete aboard 80 boats on the 53rd  International Sport Fishing Tournament in San Blas, according to estimates by the Tepic Sport Fishing Club.
The tournament, which will take place between May 29 and June 2, was formally introduced. “This is the best tournament in the Mexican Pacific, not only because of the prizes or the number of participating boats, but also because of the ambiance that is enjoyed in San Blas, which is a token of the friendliness of the services that can be found in Riviera Nayarit”, said Carlos Menchaca Díaz del Guante, president of the Tepic Sport Fishing Club.
Prizes will include cars for the best sailfish, marlin, and dorado catches. The official opening ceremony will take place on March, May 29 at the Touristic Marina of San Blas. Fishing will begin on Thursday 30 at 6:00 and the starting shotgun will sound after the National Anthem is played.
Activities will be suspended on Friday, May 30 for the Official Lunch, and will resume on Saturday 1 and Sunday 2, when sportsmen will start looking for the big fish at 4:00 am. Weighing will stop at 18:00 on Thursday and Saturday, and at 17:00 on Sunday, as the awards ceremony will begin at 18:00.
Menchaca Díaz del Guante expressed his gratitude to supporting authorities and participating sponsors as their participation was invaluable to raise the attractive prizes offered by this competition.