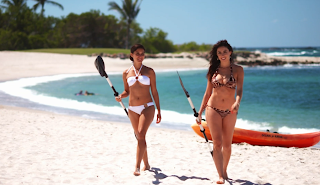 In Riviera Nayarit luxury means magic, and this magic caught the attention of Brazilian travelers, so our destination has begun PR efforts together with the Scritta agency, which is representing Mexico’s Pacific Treasure to the media and to travel agents in Brazil.

The tourist offering of the destination known as Mexico’s Pacific Treasure was assembled las year at the Pavillion coordinated by the Council for the Touristic Promotion of Mexico (CPTM) where we were in contact with airlines, wholesalers, and tour operators, resulting in business meetings to attract tourists from Brazil.

Previously, the annual meeting of Lide – the most influential business group in Brazil, had taken place in Riviera Nayarit, attracting the attention of Brazilians to a destination whose nature and high luxury invite celebrities to vacation here.

“Since we already had experimented a significant acceptance in that market, which also turns out to be more attractive to the high luxury segment promoted by Riviera Nayarit, we decided to expand our presence through Scritta, which will represent us in the press and to the tourism industry professionals in the country. The first results are already here, as we’re welcoming a group of journalists that will be visiting the destination for the Punta Mita Gourmet & Golf Classic”, said Marc Murphy, Managing Director of the Convention and Visitors Bureau (CVB) of Riviera Nayarit.

Brazil has a the largest luxury goods market in Latin America, worth 2.3 billion dollars, and according to MCF Fashion, a renowned Brazilian consulting firm for high-end product, this segment is increasing 35% each year.

The Convention and Visitors Bureau (CVB) of Riviera Nayarit is a non-profit association that operates under the direction of the Hotel and Motel Association of Bahía de Banderas in order to promote Riviera Nayarit. Through these actions we intend to promote tourism that fosters the harmonious development of all the people of Nayarit, as instructed by the Governor for the People, Roberto Sandoval Castañeda. The Thrill of Being a “Charra for a Day”