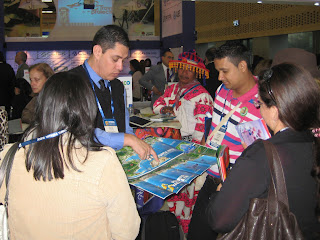 In Riviera Nayarit luxury is our magic, and our magic has already caught the attention of the touristic industry in Colombia. In 2013, the destination known as Mexico’s Pacific Treasure is going back to the Vitrina Turística de la Asociación Nacinal de Agencias de Viajes y Turismo de Colombia (Anato), which took place in Bogotá from February 27 through March 1st.

“Our promotion work in Colombia is slowly paying off. Last year we were at Anato with the wholesaler Travel Depot’s program, which in turn promoted our destination with a very interesting program. This year we were at Mexico’s pavilion, together with the Council for the Promotion of Tourism (CPTM), where we featured a Huichol artisan, and also offered several vacation packages together important agencies in the country”, said Marc Murphy, Managing Director of the CVB of Riviera Nayarit on our participation at the fair this year.

The marketing group of Riviera Nayarit will hold sessions with Turivel, which last January sent representatives to explore our destination and is interested in promoting it. We’ve also reached out to wholesalers Luz Verde and All Pass Travel, and we’ve followed up on the success we had in 2012 with Travel Depot, who is looking to renew its program.

“As part of the activities, on March 1 there was a breakfast sponsored by the CPTM for 70 travel agents who will promote Riviera Nayarit as a luxury and aspirational destination. We’ve had a very good acceptance in this market niche and we’ve even had some entrepreneurial groups in 2012 staying in our destination”, said Murphy.