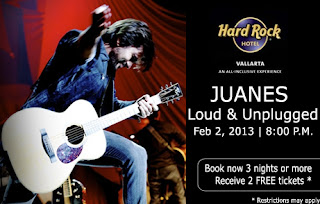 The Colombian rock star will celebrate his nomination to the Grammy with the tour “Loud & Unplugged”, performing at the Hard Rock Hotel Vallarta on February 2
Tickets are available through Ticket Master and at the hotel’s lobby
In Riviera Nayaritluxury is our magic, and our destination will rock with the music of Colombian group Juanes, who will offer a concert here as part of his tour “Loud & Unplugged”, on February 2 at 20:30 at the Hard Rock Hotel Vallarta, located in the Nuevo Vallarta development.
The Colombian singer is celebrating his nomination last December to the Grammy Awards for his album “Juanes MTV Unplugged”, as the “Best Latin Pop Album”. The nomination is reinforcing the success that the band has had after receiving awards like “Best Album of the Year” and “Best Video Long Form” in the Latin Grammys, as well as “Album of the Year” by the People en Español Awards.
But this isn’t all, the material that includes songs like “La Señal” and “Me Enamora” has also received 4 nominations for the Premios Lo Nuestro 2013: Rock/Alternative Album of the Year, Rock/Alternative Artist of the Year, and Rock/Alternative Song of the Year.
The hosting venue, Hard Rock Hotel Vallarta, has announced that tickets are available through Ticket Master (www.ticketmaster.com) and at the hotel’s lobby.
“At Hard Rock Hotels music is a vital part of the all-inclusive vacation concept that we offer. Concerts like Juanes in Riviera Nayarit are part of this spirit and make our guests and those who visit us enjoy a more innovative and incomparable experience”, said Andrés Martínez, Marketing Director for the brand in Mexico.
The Convention and Visitors Bureau (CVB) of Riviera Nayarit celebrates the initiative of Hard Rock Hotel Vallarta, as events like these not only attract more tourists to our destination, but they also contribute to the promotion of Mexico’s Pacific Treasure by getting the attention of specialized media.
A ROCKING LONG WEEKEND
Hard Rock Hotel Vallarta has launched a promotion to enjoy the concert as well as a long weekend: book 3 nights through February 1 – 4, and receive two tickets for the concert.
For more information and for tickets, visit:
www.hrhvallarta.com
https://www.rivieranayarit.com/wp-content/uploads/2019/07/logox300.jpg 0 0 Marc Murphy https://www.rivieranayarit.com/wp-content/uploads/2019/07/logox300.jpg Marc Murphy2013-01-22 08:41:002013-01-22 08:41:00Juanes will rock in Riviera Nayarit "Nayar" the Hawksbill Turtle to be Released TODAY on Litibu Beach

The Reforestation Project Continues In The Riviera Nayarit

Riviera Nayarit adds another success story with the Touristic Half Marathon