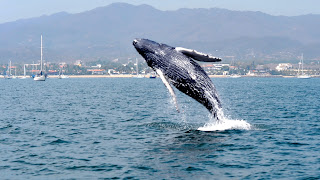 In Riviera Nayarit  luxury is our nature that attracts hundreds of Humpback Whales along the entire coast of Mexico’s Pacific Treasure every year.
The annual whale migration from the cold waters of Alaska brings them as far down as the coasts of Riviera Nayarit where they procreate and raise their young in the warm waters of Banderas Bay. The newborns don’t yet posses the required amount of body fat to isolate them from the cold water in the North pacific. Spending the winter in our area gives them time; come March, to be strong enough for the journey back to Alaska.
While females nurse the cafls, teaching them behaviors such as breaching, spy hopping, pectoral fin and tail slapping, the males sing in long, repetitive voices to court females, and mate when possible. Many boats will drop a microphone into the water so you can hear firsthand the enchanting, hunting, songs from under the water.
Between the months of December- March, whales can be seen all over Riviera Nayarit; a short walk on the beach will produce the sighting of a blow hole erupting, a slapping fin or the most spectacular view of them all: the male back flip.
Males keen on impressing females with their size will jump entirely out of the water, role in the air and land on their back in a big splash. No small task at a weight of 30 Tons.  Of course, this show is much more thrilling when done just dozens of feet away from while you’re sitting in your boat, hence the enormous popularity of the whale watching tours.
The Humpback Whale is a protected species so there is no touching or feeding but many times the whales will put on a show for the boat’s strange inhabitants, with their clocking cameras and the “Hoos” and “Ahhas” gasps of owe.
A typical whale watching expedition will take between 2-4 hours and will combine breakfast on board. Once a whale has been spotted in the distance, the boat will race towards it, stopping at the required distance to allow cameras to role: The human cries of joy and astonishment, the sounds and streams of water coming out of the from the blowhole near you, the playful splashing of the mothers and young, the smiling faces, because of the curve of their mouth, you would swear they’re smiling at you, makes for an unforgettable experience.
When the giant mammals disappear under water, the photo comparing and the existed chatter resumes until the next whale appears in the distance and the whole show repeats itself again.
https://www.rivieranayarit.com/wp-content/uploads/2019/07/logox300.jpg 0 0 Marc Murphy https://www.rivieranayarit.com/wp-content/uploads/2019/07/logox300.jpg Marc Murphy2012-11-06 10:58:002012-11-06 10:58:00Whales will return to Riviera Nayarit

Riviera Nayarit, an opportunity to get up close to ancient cultures My Ever-Changing View of Jaltemba Bay: Part 1
Scroll to top