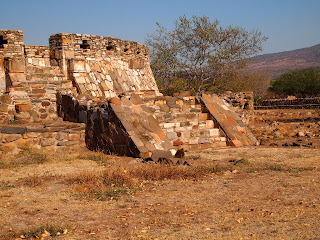 In the Archeological zone of “Los Toriles” (Also known as “The Ruins”)which is located in Ixtlan del Rio, it is rumored that between 8pm-12 pm 7 dwarfs will appear from the ruins, from the ancient graves below the ground, long abandoned now.  The dwarfs come out and play, joyfully dancing hand in hand.  Beside them, a lady appears; she’s there to watch for them, if someone will walk nearby, they disappear. Many times during the years, on different occasions, people indented to investigate, where were all these mysterious noises come from (laughter, applauses, loud voices) and what is this all about but every time people tried to come close to the pyramids by night, the noises would stop and the figures disappeared.
Courtesy  of: Profesor. Maria de Jesús Ramírez Muñoz
“Legends of  Ixtlán del Río”
http://www.nayaritas.net
https://www.rivieranayarit.com/wp-content/uploads/2019/07/logox300.jpg 0 0 Marc Murphy https://www.rivieranayarit.com/wp-content/uploads/2019/07/logox300.jpg Marc Murphy2012-10-17 11:30:002012-10-17 11:30:00The legend about the Dwarfs from Los Toriles

The Riviera Nayarit and the Islas Marietas just a click away

Top Ten For Wildlife In The Riviera Nayarit