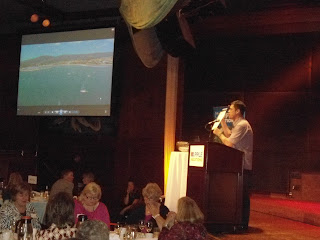 In Riviera Nayaritluxury is our magic. This was the message sent out to approximately 400 travel agents associated with the wholesaler Apple Vacations, who attended the seminars organized in Minneapolis, Milwaukee and Kansas City during a work tour between September 19 and 21, where Mexico’s Pacific Treasure was presented as the winner of the “Best Beach Destination Crystal Apple Award”.
The award bestowed on September 11 to our destination is based on surveys made to clients of this wholesaler. The Convention and Visitors Bureau (CVB) of Riviera Nayarit offered a video training program and later assessed the knowledge acquired by agents.
Seminars were offered as part of gala dinners that Apple Vacations offered in these three cities. Dreams Villamagna Nuevo Vallarta, Grand Palladium and The Royal Suites Riviera Nayarit and Riu Hotels, which has three properties in the destination, also participated in the event.
Apple Vacations was founded in 1969 and is one of the first charter companies established in North America, and the first one to introduce the “All Inclusive” package. Its founders realized that they had a significant business opportunity by offering vacations to exotic destinations for a fraction of the cost of using traditional airlines; back then, international travel was considered a luxury, and Apple Vacations has contributed to creating a culture of high-quality travel at an affordable price.
For more than 40 years, this wholesaler has managed to become one of the key players in this market, with over 2,000 employees and offices in 20 cities in the United States. This is the reason why the association that has been established between Riviera Nayarit and Apple Vacations is an important factor to attract tourists to our destination.
https://www.rivieranayarit.com/wp-content/uploads/2019/07/logox300.jpg 0 0 Marc Murphy https://www.rivieranayarit.com/wp-content/uploads/2019/07/logox300.jpg Marc Murphy2012-10-01 09:22:002012-10-01 09:22:00Riviera Nayarit certified travel agents associated with Apple Vacations

The Riviera Nayarit Is One Of Travel Weekly’s “Preview 2015: Destinations”

Kourtney Kardashian To Tie The Knot In The Riviera Nayarit?

Are you ready to fish at Riviera Nayarit?

WHY TRAVEL TO THE RIVIERA NAYARIT DURING LOW SEASON

Danna Paola And Other Celebrities Visit The Riviera Nayarit

Guess who is vacationing at Riviera Nayarit?
0 replies

Do you know what rivers pass by the Island of Mexcaltitán? Enjoy wonderful vacations at Riviera Nayarit
Scroll to top