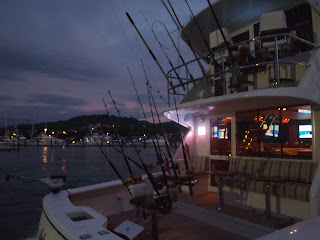 • The Fishing Club of Tepic stated that 42 people have already registered for the First Edition of the Sport Fishing Tournament of La Cruz de Huanacaxtle in Riviera Nayarit, next October 10 – 14
·         There will be 2.5 million pesos in prizes, including 2 pick-up trucks, cars, fishing kits and much more
In Riviera Nayarit luxury is our nature, and our natural wealth has made us one of the most important destinations to experience sport fishing. The third tournament this year is about to begin: The First International Sport Fishing Tournament of La Cruz de Huanacaxtle, which will take place next October 10 and 14 at Marina Riviera Nayarit.
According to the organizers, the Sport Fishing Club of Tepic, there are already 42 ships pre-registered for the event, and they’re expecting to have a large number of participants, even though this’ll be the first edition of the tournament.
“Those who have participated in the San Blas Fishing Tournament know the atmosphere and the celebrations that are part of our events. At La Cruz de Huanacaxtle we have the best infrastructure, and we’ll have all the best elements of the San Blas tournament, plus many other surprises, said Francisco Navarrete Buhaya, director to the Tournament.
Registration is $19,000 pesos per team, and the competition rules are available at: www.clubdepescadeportivatepic.com. Participating categories include Sailfish, with a maximum of three catches per ship, with a minimum weigh of 30 kg; Dorado, with a maximum of three catches per ship and a minimum weigh of 10 kg; Marlin, limited to three catches weighing over 85 kg; and Tuna, with three catches of at least 50 kg.
Mexico’s Pacific Treasure is one of the most important fishing destinations in the world, as it offers great fishing year-round and several kinds of fish like wahoo, sailfish, dolphin-fish, tuna, three different species of marlin, sawfish, and snapper, among many others.
https://www.rivieranayarit.com/wp-content/uploads/2019/07/logox300.jpg 0 0 Marc Murphy https://www.rivieranayarit.com/wp-content/uploads/2019/07/logox300.jpg Marc Murphy2012-09-06 08:55:002012-09-06 08:55:00New sport fishing tournament in Riviera Nayarit