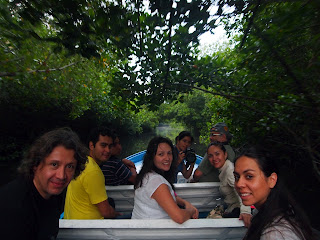 ·   Located near San Blas, La Tovara offers the largest collection of birds in Mexico, a clever film set, and adventures in the jungle
Chencho has a pet word that explains everything, and walking through the marshes of La Tovara with this guide becomes an endless adventure.  Every sentence he utters begins with “So…” and through his tales, Riviera Nayaritbegins to unravel a different way.
Chencho always offers his tour of the mangroves early in the morning while a light mist covers everything in the dock. So… you have to get up early to enjoy this tour. He initially appears on board motorized panga, just like in a scene of a Hollywood movie.
The tour begins either at the pier of La Aguada or El Conchal. Then Chencho heads to the mouth of the estuary next to the Pacific Ocean, called El Pozo.  So… he points to his right index and says: “There lies Borrego Beach, the closest beach to the Port of San Blas, and to the left you’ll find Las Islitas Beach, at Matanchen Bay”.
He gives us a description of the fishing of mullets and snappers in the briny waters of the estuary, while some birds are actually swallowing a few gray mullets. “So… fishing in the estuary is easier, because the fish come here to feed and they’re concentrated here”, he explains.
We then go back towards the estuary and head to La Tovara, a national park that has the largest concentration of migratory birds in Mexico. We travel at low speed, allowing us to discover each and every bird.
We noticed Pichichin ducks diving near the mouth of the estuary, and we were also able to see brown pelicans, gulls and frigates. Here we begin to notice hawks, egrets, herons, pink and cinnamon herons, kingfishers, jacanas and chachalacas, among many others.
At several locations we’re forced to duck our head due to the dense vegetation of the estuary. Lilies start to appear on the shore and Chencho approaches the edge of the mangrove looking for some flowers for the passengers. Ferns, reeds, and extensive flora cover everything in a lush green.
Crocodiles and turtles rest on floating logs, and Chenco says that there are “thousands”. Maybe he’s exaggerating just a little, and when he tells the story of Nueva Galicia he’s not completely accurate with historic events, but nevertheless makes a great description of it.
Eventually, a gap opens in the mangroves and we can see impressive stilt houses that were built for the production of the Cabeza de Vaca film, which tells the story of the Conquest of Mexico in the Northern Pacific, and Chencho describes the movie thoroughly for those who haven’t seen it yet.
The tour ends at El Cocodrilario, completing the adventure.
https://www.rivieranayarit.com/wp-content/uploads/2019/07/logox300.jpg 0 0 Marc Murphy https://www.rivieranayarit.com/wp-content/uploads/2019/07/logox300.jpg Marc Murphy2012-08-16 07:58:002012-08-16 07:58:00Riviera Nayarit, an endless adventure

THE MANY WONDERS OF THE RIVIERA NAYARIT

Pre-Summer Promos Have Arrived In The Riviera Nayarit!