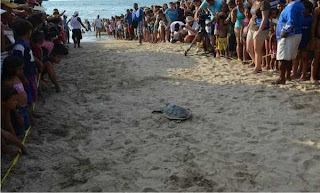 In Riviera Nayarit luxury is our nature, and we’re constantly protecting it, as it represents one of the greatest assets of our destination. On July 22, the turtle called Jaltemba was released after being rescued last May by Red Tortuguera A.C. The turtle was originally found around Jaltamba Bay (and named accordingly) with a hook stuck in its throat.
Jaltemba underwent a complicated surgery to remove the hook, recovered well and gained weight, so specialists decided that it could be reinserted to its habitat, and the turtle was released at the beach in Rincon de Guayabitos, close to the location where it was rescued.
“It has been very important to rescue and reintegrate Jaltemba to its habitat, not only because the hawksbill sea turtle is the most endangered species among the turtles that come to our region, but also because this case has had a great impact on society and the media, and this helped us raise public awareness about the importance preserving this species”, said Vicente Peña, field technician of Red Tortuguera A.C.
In fact, Jaltemba was released with a satellite tracking chip that will reveal more about its location and habits, something essential to learn more about hawksbill turtles, in order to create strategies for its preservation.
Olive ridely turtles are the common visitors to Riviera Nayarit. There are preservation efforts along the coast from all sectors of society, which have been generating results, and the number of nests has increased significantly. However, hawksbill turtles like Jaltemba are not common, and therefore the especial importance of this rescue.
According to Eastern Pacific Hawksbill Initiative (ICAPO), the protection of the hawksbill turtle in the Pacific is one of the conservation issues that have become a priority, because this is one of the most endangered species in the region: it’s estimated that only a couple hundred turtles nest along the entire coast.
This low level of nests indicates that there is very little likelihood that the species will survive we don’t carry out coordinated actions for their preservation. Protecting their eggs, fostering hatching, generating biological information on the species and protecting marine habitats are part of our strategy.
Vicente Peña reported that this year there have been 20 registered nests in Punta Mita. Even though the nesting season is just beginning, there are two additional new nests whose characteristics suggest that they’re probably hawksbill nests.
These numbers are encouraging if we consider that in all of 2011 there were only 4 nests, and there were none in 2010, according to Tortuguera Red AC. The organization also said that Punta Mita is one of only two nesting grounds for hawksbill turtles in the entire Mexican Pacific.
The Convention and Visitors Bureau (CVB) of Riviera Nayarit wishes to thank and congratulates Vicente Peña and the entire team of Red Tortuguera AC, as well as Catherine E. Hart for coordinating the rescue efforts of Jaltemba. We also thank Alan Zavala, who arranged to receive Jaltemba diligently in the research center, and Paula Claussell, Jesus Pineda, Roy Quintero, Irving Gonzalez and Alonso Aguirre, and all the staff and students of CIIDIR, who offered their time and efforts to save this turtle.
https://www.rivieranayarit.com/wp-content/uploads/2019/07/logox300.jpg 0 0 Marc Murphy https://www.rivieranayarit.com/wp-content/uploads/2019/07/logox300.jpg Marc Murphy2012-08-03 08:09:002012-08-03 08:09:00“Jaltemba” was successfully released in Riviera Nayarit