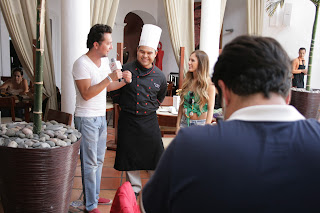 ·         PR efforts generated extensive media exposure on this TV channel valued at $600,000 pesos, at no cost to our destination
“Oh my God!” exclaimed Bazooka Joe, one of the presenters of Ritmoson Latino, who was amazed by the beauty of Riviera Nayarit, where he recorded over 120 spots that will be aired from July 30 to August 4 as an intermission between videos of this television channel, which is part of the main cable companies in Mexico and 45 other countries in America and Europe.
The production crew of ‘El Break’, a Ritmoson Latino show that provides useful information on how to spend summer holidays, toured Riviera Nayarit from end to end to record these spots. This resulting media exposure is valued at over $600,000 pesos, but will be provided at no cost to our destination.
Bazooka Joe and Erika Bruni visited Tepic, where they toured the historic downtown area led by the popular character Concha Moños, who also struck up a friendly competition to see whether Bruni or himself could attract more looks from passersby on the street.
They also cooked in San Blas with chef Betty Vasquez from El Delfin restaurant at Hotel Garza Canela, and introduced the main attractions of the historic port. They caught a dorado in Rincon de Guayabitos and admired the reefs around Isla del Coral on a glass-bottom boat. They also played polo in San Pancho, fried snappers in Punta Mita and even fed the tigers at Paradise Village in Nuevo Vallarta.
The Convention and Visitors Bureau (CVB) of Riviera Nayarit, a civil association dedicated to promoting the destination has worked closely with all sectors of society and government, in order to achieve its objective: to position Riviera Nayarit as an independent destination, with great attractions, spectacular landscapes and mostly, high-quality services.
One of the strategies used by the CVB is to attract the attention of the media through PR efforts like this one in conjunction with Ritmoson Latino, in order to achieve the greatest possible exposure with the lowest cost, achieving a greater influx of tourists to the destination.
“The Convention and Visitors Bureau endorses its commitment to work intensely to achieve its objective of attracting more tourists to Mexico’s Pacific Treasure, and to distribute them evenly throughout Nayarit in order to improve the lives of all our people”, said Fernando Ortega, president of the CVB.
https://www.rivieranayarit.com/wp-content/uploads/2019/07/logox300.jpg 0 0 Marc Murphy https://www.rivieranayarit.com/wp-content/uploads/2019/07/logox300.jpg Marc Murphy2012-07-26 08:31:002012-07-26 08:31:00Ritmoson Latino will broadcast spots on Riviera Nayarit