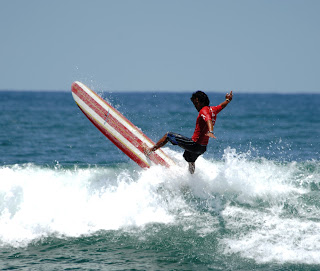 In Riviera Nayaritluxury is our nature, and it’s our very nature what provides the best waves to surf. Influential international publications recently mentioned Riviera Nayarit as one of the must-visit destinations for surf lovers.
The US edition of Men’s Fitness, the influential online news site The Hufftington Post, and Oyster Blog have published articles and included Riviera Nayarit due to its exceptional conditions to surf in different modalities.
The online US edition of Men’s Fitness included our destination in its list of top 10 destinations for Stand Up Paddle, which is becoming increasingly popular worldwide. The list, which was presented as a photo gallery, stated “Sayulita is a quiet enclave with a big paddle following. The area hosts the Punta Sayulita Longboard & Stand Up Paddle Classic, which is becoming a big event for North American paddlers.” Men’s Fitness has an estimated 7,725,000 readers.
Oyster Blog also included Riviera Nayarit as one of the best places to surf this summer, and praised the point called The Cove, located within 40 minutes walking distance from the exclusive private community of Punta Mita. “Riviera Nayarit makes you think of romantic escapes or relaxing evenings napping on a hammock, but there are also several world-class and waves for all experience levels”, stated this website, which presents the best touristic products available in the world and has over 10 million users per year.
Finally, the Hufftington post, one of the most influential online news websites in North America, with 28 million unique visitors per month, endorsed Oyster Blog’s recommendation and presented a photo gallery, including Riviera Nayarit as one of the best surf destinations in the world.
https://www.rivieranayarit.com/wp-content/uploads/2019/07/logox300.jpg 0 0 Marc Murphy https://www.rivieranayarit.com/wp-content/uploads/2019/07/logox300.jpg Marc Murphy2012-07-09 06:57:002012-07-09 06:57:00International publications are ranking Riviera Nayarit as one of the best destinations to surf