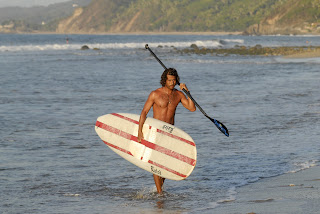 In Riviera Nayarit luxury is our nature, and this very nature will provide a special backdrop for the first National Stand Up Paddle (SUP) Championship, which will be attended by five state representations and will take place in Sayulita next June 7 through 10. The event is being organized by the Sayulita Surf Club and has already received the endorsement of the Surf Association of Nayarit (ASENAY) and the Mexican Surf Federation (FMS).
“During the last few years, it’s been common to see surfers rowing over different kinds of waves. Our country has already welcomed several events devoted to this category, but it’s time for Mexico to have its first SUP National Championship, and we’re expecting to see each one of the different State Associations sending their best competitors”, stated the organizing committee while confirming confirming participations from Nayarit, DF, Jalisco, Baja California Sur, Quintana Roo and the National Team.
In addition to the surfing competitions that will be enjoyed by the public at the breaking point at the center of the Sayulita beach, the event has already confirmed a runway, a bikini contest and a Reggae concert performing Montebeg, from Guadalajara.
The promotion efforts being made by the Convention and Visitors Bureau (CVB) of Riviera Nayarit include supporting tournaments like these, as they not only attract competitors and sport-related tourism to the region, but they also garner a strong media coverage that is provided by the different networks that cover these events.
PROGRAM
Friday 8          SUP Surfing
Saturday 9      Inaugural ceremony
Maraton Race
SUP Surfing
Reggae concert
Bikini catwalk
Sunday 10      Technical Race
SUP Surfing finals
https://www.rivieranayarit.com/wp-content/uploads/2019/07/logox300.jpg 0 0 1stonthelist https://www.rivieranayarit.com/wp-content/uploads/2019/07/logox300.jpg 1stonthelist2012-06-07 07:52:002012-06-07 07:52:00First national SUP Championship will be attended by five state representations Surf Year Round in the Riviera Nayarit

The AHMBB Commend Fernando González And Heriberto Pineda For Their Work

“Jaltemba” the Hawksbill: One Month after Her Rescue Riviera Nayarit’s efforts to diversify its markets continue
Scroll to top